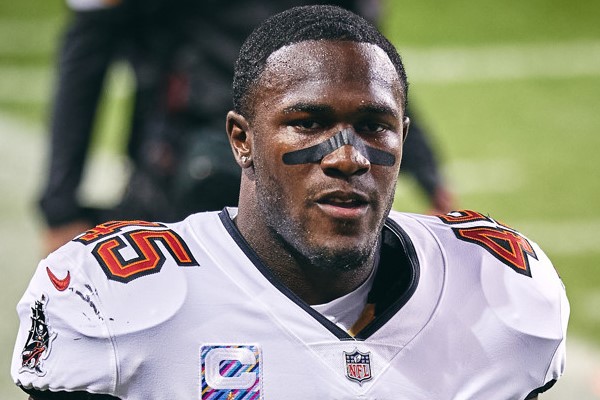 That doesn't really matter for our purposes, though.

"He has to be probably the most talented linebacker in the league," HC Bruce Arians said back in February. And even the PFF grades showed White improving in coverage over the 2nd half of the year.

Through Week 14, White had just 2 passes defensed. He got his hands on 4 more over his final 5 games (including the playoffs) -- missing 2 on the COVID list. That included 2 playoff INTs.

Of course, it was the tackling and sack production that drove White's breakout 2020. According to PFF, he tallied the 9th most pass-rushing opportunities among off-ball LBs last year and tied for 2nd-most total pressures. White (31) trailed only Demario Davis, who had 2 more in 27 more attempts. He tied Kyle Van Noy, who was an edge/off-ball hybrid and more than doubled White's pass-rushing reps.

White will remain on the field for all defensive packages. And the threats of Shaq Barrett and Jason Pierre-Paul off the edges can only help his chances of getting home as a blitzer.

We prefer Darius Leonard to White, but expect the Bucs MLB to remain among the position's scoring leaders in the foreseeable future.

White back on roster

The Buccaneers have activated MLB Devin White from the COVID list. That should put him easily on track to return for Sunday’s game at New Orleans. White missed the past 2 games. He tallied 11 and 14 tackles in the 2 regular-season meetings with the Saints

Buccaneers MLB Devin White (illness) is active today against the Lions. He was a late addition to the injury report because of the illness but should be good to go.

The Buccaneers added MLB Devin White to the injury report Saturday, listing him as questionable with an illness. We’ll check his status Sunday morning

White will be 'ready' for Carolina

Buccaneers HC Bruce Arians said in his Monday press conference that LB Devin White was active only as an "emergency" option for the Week 5 loss to the Saints. He said they put White on the gameday roster because an injury to fellow LB Jack Cichy left the team with only 3 ILBs. Arians added that White will be "ready" for the Week 6 clash with the Panthers. That indicates we should trust the 1st-round pick returning to his full-time role and take fill-in Kevin Minter back out of consideration.

Buccaneers LB Devin White returned to a limited practice Wednesday. He sat out the past 2 games after suffering a knee injury early in the Week 2 win at Carolina. White says he'll be ready to play at New Orleans on Sunday. That matchup has added upside since QB Teddy Bridgewater stepped in for Drew Brees and shortened the range in which the Saints work.