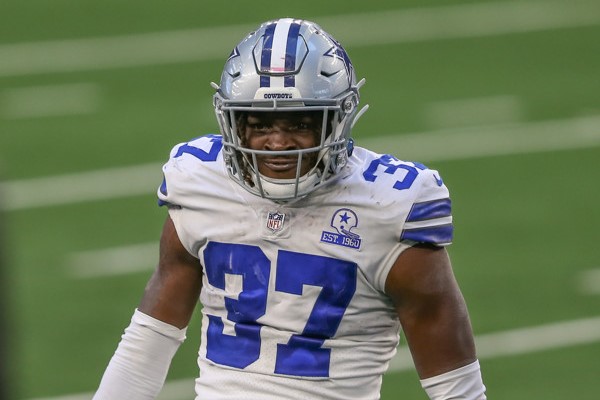 Cowboys S Donovan Wilson (groin) is doubtful for Monday night's game against the Eagles. That leaves Jayron Kearse to start in his place again. There's some upside to Kearse for deeper IDP leagues.

Wilson out vs. Chargers

The Cowboys have downgraded S Donovan Wilson to out for today's game against the Chargers. He did not travel with the team because of the groin injury that originally rendered him questionable. Malik Hooker is expected to make his Dallas debut and play in Wilson's place. Damontee Kazee is the better bet for IDP production but brings his own risk. Kazee is questionable with his own thigh injury.

Cowboys S Donovan Wilson sat out Wednesday's practice after aggravating a prior groin injury in the Week 1 loss to Tampa Bay. "It's just not where we thought it would be or hoped it would be," HC Mike McCarthy said, per Michael Gehlken of the Dallas Morning News. "We're just being smart with it. He played a lot of football on Thursday, too." Wilson played 55 of Dallas' 65 defensive snaps (85%) in that game. We'll see about his availability for this Sunday against the Chargers. Jayron Kearse would likely be the fill-in if Wilson can't go.

Cowboys S Donovan Wilson (groin) is out for today's game against the Bengals. It'll be the 2nd straight game he has missed. Darian Thompson played every defensive snap in Wilson's absence against the Ravens on Tuesday.

Cowboys S Donovan Wilson is questionable for Sunday's game against the Bengals. He missed practice all week again after sitting out Week 13 with the groin injury. Wilson looks unlikely to play and would be a high-risk IDP option even if active.