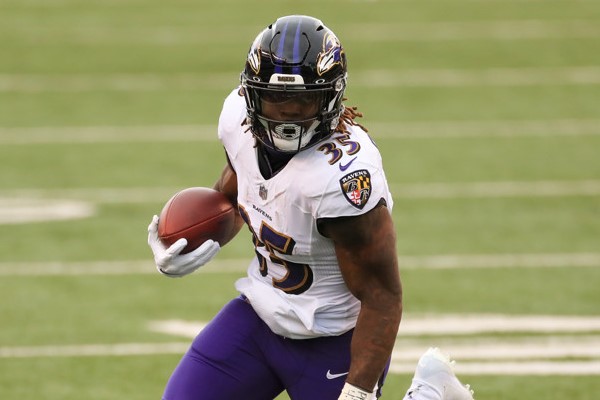 Edwards recorded 5.0+ YPC for the 3rd straight season in 2020. He’s handled 133 carries in each of those campaigns.

J.K. Dobbins out-performed him last season, though. His Round 2 pedigree says the Ravens want him to take over the backfield role.

Even if Baltimore remains the league’s run-heaviest offense, Edwards’ lack of receiving production will keep him a TD-reliant fantasy asset.

An MRI confirmed a torn ACL for Ravens RB Gus Edwards, ESPN's Adam Schefter reports. So Edwards, like teammates J.K. Dobbins and Justice Hill, will miss the entire 2021 season. That leaves Baltimore with RBs Ty'Son Williams and Trenton Cannon on the active roster and RBs Le'Veon Bell and Devonta Freeman on the practice squad. Williams is a good bet to lead the way in Monday night's opener vs. the Raiders. We'll see where the backfield goes beyond that.

Ravens RB Gus Edwards left practice Thursday after suffering a "potentially serious" knee injury, according to NFL Network's Ian Rapoport. ESPN's Adam Schefter reports that the team fears he tore an ACL. Baltimore actually cut the practice short after Edwards and CB Marcus Peters injured knees on consecutive plays. Both are heading in for testing, and we'll certainly keep watch for updates. If the testing confirms that fear, Edwards would be the 3rd RB the Ravens have lost for the season, following J.K. Dobbins (ACL) and Justice Hill (Achilles'). That would leave Ty'Son Williams and Le'Veon Bell to potentially lead the backfield in Week 1 and beyond. Baltimore also recently signed RB Trenton Cannon, but he's more of a special-teamer. Grabbing Bell off waivers where possible suddenly seems like a solid plan.

Ravens RB Gus Edwards has been activated from the COVID list. He missed the first 10 days of training camp after contracting the virus. We'll keep an eye on Edwards, but he should be ready to rock come Week 1 as the 1B to J.K. Dobbins' 1A.

Ravens RB Gus Edwards has COVID and will miss the 1st 10 days of camp, according to ESPN’s Adam Schefter. Edwards’ absence is good news for Justice Hill and any other Baltimore RB hoping to raise his profile. It can’t hurt J.K. Dobbins’ standing either. We’re not adjusting our fantasy outlook for Edwards or Dobbins at this point, though

The Ravens and RB Gus Edwards have agreed to a 2-year, $10 million extension, ESPN's Adam Schefter reports. He's now signed through the 2023 season and is the league's 15th-highest-paid RB in terms of average annual salary. It's a well-deserved raise for a guy who's averaged 5.2 yards on 414 carries over his first 3 NFL seasons. Edwards has ranked 19th, 20th and 28th in Elusive Rating those 3 years. He'll continue to play a bigger role for the Ravens than J.K. Dobbins owners would like to see.