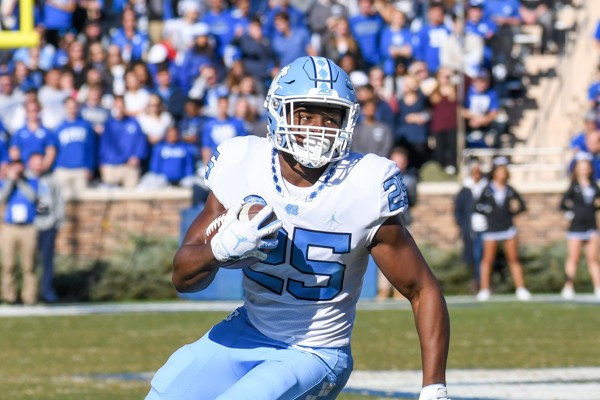 Week 5
Williams might have cost himself -- and the Broncos -- a TD in Sunday’s loss at Pittsburgh. He capped off a 49-yard, 2nd-quarter scamper by spiking the ball in the end zone. That drew a delay-of-game penalty for a loss of 5 yards -- from the 2-yard line back to the 7. Williams then carried for 2 yards on the next play before a sack and a short completion brought a FG try.

Otherwise, Williams gained just 10 yards on his other 6 rushing attempts in a tough rushing matchup. He edged Melvin Gordon 3-2 in targets, hauling in all 3 for 25 yards. Gordon edged Williams 9-8 in carries and played 11 more snaps overall.

The time share will continue to complicate the fantasy values for both backs. Week 6 at least brings a neutral matchup with the Raiders (14th in Football Outsiders run-defense DVOA).
Week 4
Like his teammate Melvin Gordon, Williams ran effectively against Baltimore, carrying 7 times for 48 yards (6.9 YPC). He also caught all 3 of his targets for 11 yards.

This was the 4th straight game where Williams saw fewer carries than the week before. The negative game script had a lot to do with that, as Denver trailed for the entire second half. They also had Drew Lock under center which certainly did not help. There was little chance to see any sort of volume for the rookie RB.

Going forward, expect to see more box scores like this one. Williams has looked the part at times but won’t see any sort of workhorse role with Gordon in the picture. More Drew Lock means more inefficient offense. When Teddy comes back the downside could be minimized. That said, 10ish carries each week is the most likely scenario unless something drastic happens.
Week 3
In what many had hoped would be a breakout performance, it was more of the same for Williams. He produced just 29 yards on his 12 carries. He did see a season high 4 targets, catching 3 for 33 yards.

Whether it's scripted or just a general plan, Williams stayed in the 14-15 opportunity range in Week 3, just like he saw in the first two games.

Melvin Gordon isn't going away in this backfield just yet. If Gordon were to have his role dramatically downsized or if he were to go away, Williams would be a compelling start most weeks.
Week 2
After Melvin Gordon outproduced Williams on the ground in Week 1, it was Williams who ran for nearly 5 yards per carry against the Jaguars on his way to 74 total yards. For the 2nd week in a row, the Denver RBs were within 1 touch of each other, making this an almost even timeshare. Overall, in a game Denver controlled, it was a bit disappointing that the RBs only had 26 carries, but it seems they wanted to keep things balanced the entire way.
Looking ahead, it seems reasonable that Williams will continue to share work with Gordon, since they’ve both been playing well. However, it’s also possible that Denver eventually wants to turn more of the backfield over to their rookie. Also, it was a bit discouraging that after playing 50% of the snaps in Week 1, Gordon out-snapped Williams 59% to 41% in this contest.
Week 1
Williams put together a decent debut, rushing for 45 yards on 14 carries in the Week 1 win over the Giants. He out-touched veteran RB Melvin Gordon (11 carries) in that department, and looked good in the times that he was in there. Williams hit the holes hard and proved to be slippery and tough to bring down.
It’s promising to see Williams get the touches out of the backfield like he did, and he was pretty much toe-to-toe with Gordon before MG ripped off a 70-yarder late in the game. Williams should continue to cut into Gordon’s production, proving that the preseason hype was for real. A dream matchup against a Jaguars defense that allowed 3 TDs to RBs last week awaits him. He becomes a sneaky option in DFS this weekend.

Coming off a super impressive junior season at North Carolina, Williams has the goods to immediately push for a significant role in Denver. He’ll duke it out for snaps with Melvin Gordon, who remained effective as a runner last year but struggled in the passing game and is entering the final year of his contract.

This figures to be a committee backfield, but don’t be surprised if Williams ends up leading the Broncos in carries this season. He’s a nice RB3 target with upside in fantasy drafts.

Williams can play in all situations

Broncos HC Vic Fangio says he's willing to use rookie RB Javonte Williams on all downs and distances. "He's earned that trust, and we're not at all against playing him in any situation, in any time of the game," Fangio said. We'll get our 1st look at how work is divvied between Williams and RB Melvin Gordon on Sunday.

Williams has been "terrific"

Broncos OC Pat Shurmur said Wednesday that RB Javonte Williams has been "terrific" early in camp. “His running ability is very obvious, but the things that we see are his instincts as a football player," Shurmur continued. "Some people just ‘get it’ and we’ve all been around people who just don’t quite ‘get it’ and they wake up every morning and start over. He gets it and it shows up in his pass protection, it shows up in being able to get lined up (and) his awareness. He’s got a really bright future.” The pass protection praise is especially noteworthy for a rookie RB. Melvin Gordon has reportedly been running as Denver's clear starter so far, but there's plenty of time for Williams to change that.

Williams to lead Broncos in carries?

The Denver Post's Ryan O'Halloran predicts that RB Javonte Williams will lead the Broncos in carries this season. He adds that RB Melvin Gordon could open the season as the starter with Williams getting a bigger and bigger role each week. "The Broncos traded up in the second round for Williams and they weren’t high-fiving and fist-pumping in the draft room because he will watch this year," O'Halloran writes. This will be an important backfield to monitor in August. Williams has climbed into the 5th round in recent FFPC best-ball drafts, while Gordon has slid into the late 8th.

Broncos HC Vic Fangio said he doesn’t see “any limits” with rookie RB Javonte Williams. “We could work him and Melvin, just spelling each other as we go, and one could go in and predominately do third-down stuff,” Fangio said via the Denver Post. “(The rotation) will work itself out and we think (Javonte’s) capable in all downs and distances and all situations for us. And I also believe that him and Melvin will be a good combination back there, along with Boone.” We’re not buying Boone as a real piece of Denver’s backfield rotation. But it’s nice to hear the early confidence in Williams, who the Broncos traded up to select in Round 2. He’s a potential RB2 right out of the gate.

Broncos trade up for Williams

The Broncos traded up 5 spots in the 2nd round to take North Carolina RB Javonte Williams with the 35th pick of the 2021 NFL Draft. Williams shared UNC’s backfield with Michael Carter, forming a thunder and lightning duo over the past 2 seasons. 2020 was a true breakout for Williams (5’10, 212) with 1,140 yards and 19 TDs on 157 attempts. He added a strong 25-305-3 receiving line. The Wallace, North Carolina native wins with incredible contact balance and power; his 0.48 broken tackles per attempt marked the best rate ever charted by Pro Football Focus. Despite the physical playing style, Williams has never missed a college game due to injury. He joins Melvin Gordon in Denver’s backfield in what figures to be a committee attack in 2021. Gordon hits free agency next offseason.