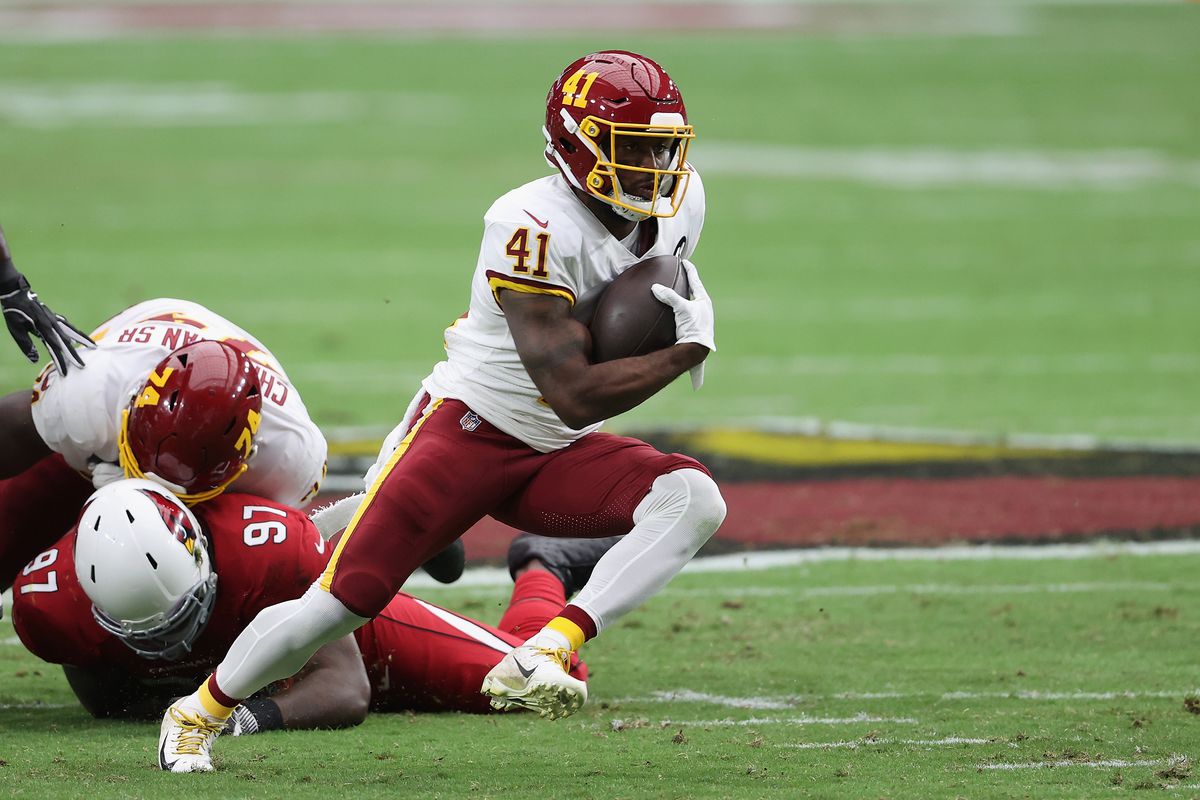 There’s room for McKissic to factor into the replacement plan if Logan Thomas isn’t ready early in the season coming off his December ACL tear. Otherwise, a tenuous situation for McKissic’s fantasy upside got more challenging with the addition of another 3rd-round RB. And the new QB probably isn’t an upgrade for his target count, especially when you also factor in the arrival of WR Jahan Dotson and WR Curtis Samuel’s return from a groin injury. McKissic has a place in the double-digit rounds of PPR best-ball drafts. But he’s not a prospect worth getting excited about in any fantasy format.

Commanders RB Antonio Gibson played his fewest snaps and saw his fewest touches yet this season in Sunday's loss to the Eagles. He carried 12 times for 38 yards and caught his lone target for 2 yards. Gibson did convert a 1-yard 4th-quarter TD run to salvage his fantasy day. But he continued to purge receiving opportunities. Gibson led the backfield in Week 1 targets. He trailed J.D. McKissic in that category in Week 2 but still led his teammate in routes. Gibson trailed McKissic there, too, against Philly, running just 16 routes to McKissic's 31. With RB Brian Robinson working toward a return, now would be a good time to see what you can trade Gibson for. McKissic tied for 2nd against the Eagles with 9 targets, catching 6 for 32 yards. He remained minimally involved in the ground game.

Gibson struggles for yardage but scores

Commanders RB Antonio Gibson managed just 28 yards on 14 carries in Sunday's loss to the Lions. He did score from 1-yard out in the 4th quarter to save his fantasy line. Gibson also watched J.D. McKissic run more routes, a change from the way they operated in the passing game in Week 1. McKissic ranked 3rd on the team with 7 targets against Detroit, while Gibson garnered just 4. He caught 2 for 13 yards.

For the 2nd straight game, WR Curtis Samuel led all Commanders in targets Sunday. He drew 9 in the 36-27 loss to Detroit, catching 7 for 78 yards and a TD. (Samuel added a carry for 21 yards.) WR Terry McLaurin checked in 2nd, catching 4 of his 8 targets for 75 yards. J.D. McKissic rebounded from a quiet Week 1 to rank 3rd with 7 targets, catching all of them for 54 yards. WR Jahan Dotson and TE Logan Thomas garnered 5 looks apiece and each caught a TD.

In a refreshing turn of events, Washington RB Antonio Gibson snagged a career-high 7 passes (on 8 targets) for 72 yards. Compare that to the 3 grabs (on 3 targets) for receiving back J.D. McKissic. Gibson added 14 carries for 58 yards. His main highlight came in the passing game, as he beat the defense vertically for a 26-yard gain out of the backfield. Critically, he also managed to avoid fumbling. Following a tumultuous offseason, Week 1 was clearly a huge win for the young RB. Next up is a Lions defense that just allowed 4 rushing TDs to the Eagles.

The Commanders kept RB Brian Robinson on their 53-man roster Tuesday. It's not yet clear when Robinson will be ready to play, and he could still be a candidate for short-term IR. Washington cut RBs Jaret Patterson and Reggie Bonnafon on Tuesday. The team kept Jonathan Williams as the 4th RB with Antonio Gibson, J.D. McKissic and Robinson. We'll see how Robinson's situation develops. At the least, Gibson and McKissic should be in for early-season touch boosts.