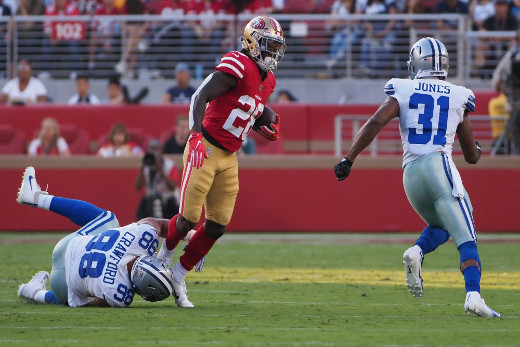 According to SB Nation's Arrowhead Pride blog, the Chiefs "have their No. 1 and No. 2 backs in place in starter Clyde Edwards-Helaire and third-down back Darrel Williams." That would leave Jerick McKinnon fighting for 3rd on the depth chart, with Elijah McGuire, Darwin Thompson and Derrick Gore as competitors. This might be more opinion than fact, but it's also likely based on the team's usage of its RBs so far in training camp. If you're drafting, Darrel Williams should be the 2nd Chiefs RB off the board. Don't get too high on anyone other than CEH at the position for K.C., though. There's also still the possibility that the Chiefs add another RB.

The Chiefs are signing RB Jerick McKinnon, according to NFL Network's Peter Schrager. We'll see about the contract details, but we'd expect some sort of low-risk 1-year deal. McKinnon averaged just 5.1 carries and 2.1 receptions per game with the 49ers last season, after losing 2 years to an ACL tear (plus complications). McKinnon figures to compete with Darwin Thompson and Darrel Williams for roster spots. We'll see how the backfield sorts out -- and whether Kansas City adds a RB in the draft -- but aren't interested in McKinnon for best-ball drafts right now.

McKinnon the passing-down back

NBC Sports' Matt Maiocco believes Jerick McKinnon is in line to be the 49ers' passing-down back in 2020. "McKinnon gives the 49ers something they previously lacked: A legitimate route-runner and third-down option out of the backfield," Maiocco writes. "If he’s healthy, McKinnon will have a spot on the team." Injuries have prevented McKinnon from playing a single game for the 49ers since they signed him ahead of the 2018 campaign. But San Francisco restructured his deal this offseason and evidently still has plans for him. McKinnon caught 94 balls over his final 2 seasons in Minnesota. Maiocco adds that Matt Breida is the 49ers RB most likely to be off the roster come Week 1.

McKinnon done for the season

The 49ers have opted to place RB Jerick McKinnon (knee) on season-ending injured reserve, according to NFL Network's Ian Rapoport. That leaves Tevin Coleman and Matt Breida as the team's clear top 2 RBs. Raheem Mostert is 3rd on the depth chart.

The 49ers are placing RB Jerick McKinnon (knee) on IR, according to NFL Network's Ian Rapoport. It's unclear if McKinnon has a shot to play the 2nd half of the season as a designated-to-return player. Rapoport hears that McKinnon might have had another procedure on that troublesome knee. We'll keep an eye on him, but McKinnon isn't worth stashing in fantasy leagues that don't have an IR spot. RBs Tevin Coleman (5.09) and Matt Breida (8.02) are both worth considering at ADP.