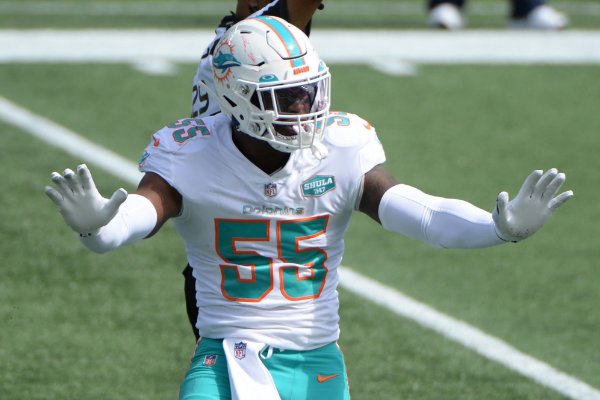 Last season's usage left us a little unsure of how the Dolphins valued Baker. But they erased all doubt with a 3-year, $37.5 million extension in June ($20 million of that guaranteed).

The iffy part was a playing time pattern that saw Baker go from full time through 6 weeks down below 80%, to 59% and a low point of 31% in Week 11. But that turned around and returned to full playing time or the final 4 games.

There was no shortage of production when he was on the field. Most notable was the increased pass-rushing production. His opportunities didn't grow all that much. Baker went from rushing on 12.4% of his defensive snaps in 2019 to 15.5% of them last year, according to Pro Football Focus. He posted just 1 more total pressure. But he went from 2 to 8 sacks and earned a higher PFF grade in that category.

Miami dumping LB Kyle Van Noy -- who saw more pass-rushing opportunities than anyone else in the off-ball LB category -- might boost Baker's opportunities further. But the most important factor is the rebound in overall playing time.

Baker checked in 20th and 15th among fantasy LBs the past 2 years, respectively. So he's heading in the right direction. We like the chances that he'll continue ascending.

Dolphins LB Jerome Baker (knee) is active for today's game against the Texans. There's clear upside to the matchup but also the chance Baker sees his playing time limited after missing Week 8 with the knee injury.

Baker OUT vs. Bills

Dolphins LB Jerome Baker (knee) is questionable for Sunday's game against the Bills after putting in limited practices all week. We'll check his status Sunday morning.

Dolphins LB Jerome Baker left Sunday's loss to the Falcons with a knee injury. ESPN's Marcel Louis-Jacques reports that Baker already had an MRI and that it "came back clean." We'll see about the LB's availability for Week 8 at Buffalo. Sam Eguavoen wound up leading Miami LBs with 84% snap share against Atlanta.