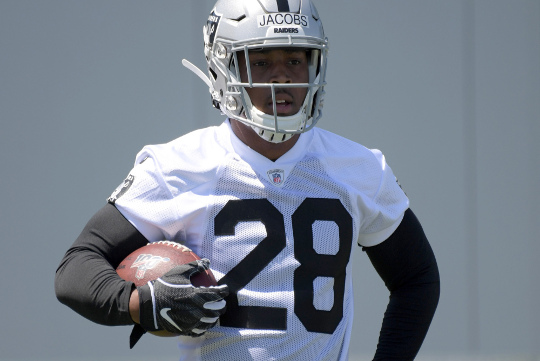 The Raiders declined the 5th-year option on RB Josh Jacobs. Such a move would have cost the team $8 million in 2023. Jacobs, 24, heads into his 4th season fresh off an RB11 finish.

McDaniels calls Jacobs a 3-down back

When asked about RB Josh Jacobs on Tuesday, new Raiders HC Josh McDaniels praised the 24-year-old and called him a back who "can play on all 3 downs." That's obviously worth noting because it indicates that McDaniels likes Jacobs' passing-game ability. Jacobs has seen his targets and receptions increase each of the past 2 seasons. It remains to be seen, of course, what else the Raiders do with their backfield ahead of the 2022 campaign. But it can't hurt for the new coach to like the incumbent lead RB. McDaniels did also say he has already spoken with Jacobs about ball-security issues. Let's hope the 4th-year back works to decrease his fumbles as he begins life under a Bill Belichick disciple. Under McDaniels, fumbles could impact Jacobs' playing time.

Raiders RB Josh Jacobs (ribs) is active for tonight’s game vs. the Chargers. He got in 3 limited practices this week and should be ready for his usual workload in this must-win game.

Raiders RB Josh Jacobs (ribs) is listed as questionable for Sunday night’s game vs. the Chargers. He got in 3 limited practices this week. We’d be surprised if Jacobs missed this must-win game but will keep you updated on his status.

Raiders RB Josh Jacobs (ankle) is active for today’s game vs. Washington. He was added to the injury report on Thursday and limited in the final 2 practices of the week, but we haven’t heard anything about Jacobs’ usage being impacted today.