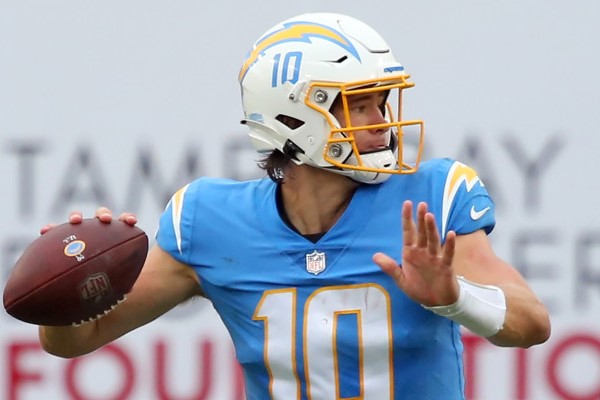 The past 2 games marked the 1st time that Herbert has had consecutive games with 70%+ completions, 2+ TD passes or passer ratings of 100+ since Week 2. This week brings the league's 2nd best QB scoring matchup.

Herbert is 1 of the safest bets in 2022 fantasy drafts. He’s a 24-year-old former 6th overall pick who’s opened his career with QB9 and QB3 fantasy finishes. He’s back in the same offense this season under HC Brandon Staley and OC Joe Lombardi. And he returns the bulk of last year’s pass-catchers and offensive line.

Herbert should be 1 of the first few QBs off the board in fantasy drafts and is 1 of a handful of guys with the potential to lead the position in fantasy points.

Chargers QB Justin Herbert threw for 274 yards and 3 TDs in Sunday's win over the Cardinals. Herbert hit WR Keenan Allen, WR DeAndre Carter and RB Austin Ekeler for TDs. The 1-yarder to Ekeler with 15 seconds left won the game. Ekeler (15) and Carter (10) combined for 53.2% of Herbert's pass attempts and 51.4% of his completions for the game. Carter caught 7 for 73 yards. WR Josh Palmer went 5-56 on 7 targets. Allen finished with 5 receptions for 49 yards. TE Gerald Everett added 4 catches for 18 yards on 4 targets. The Chargers get a soft Raiders defense in Week 13.

Efficiency picks up with WR returns

Chargers QB Justin Herbert posted a season-high 9.3 yards per pass attempt in Sunday night's loss to the Chiefs, finishing with 280 yards on 23-of-30 passing. He got WR Mike Williams back only briefly, as Williams tweaked his sprained ankle after just 1 target. WR Keenan Allen, however, racked up 5 catches for 94 yards among 8 targets in his most extensive action of the season. Allen had appeared for abbreviated stretches in just 2 previous games because of a nagging hamstring injury. There's room for Herbert to be a fantasy difference maker the rest of the way, with the league's 2nd-best remaining QB schedule.

Chargers WRs Mike Williams (ankle) and Keenan Allen (hamstring) are active for tonight’s game vs. the Chiefs. Both guys were limited in Wednesday and Thursday’s practices and upgraded to full participation on Friday. Their presence is excellent news for QB Justin Herbert.

Herbert’s started his career with back to back 30+ TD seasons. We have no concerns over his ability, and Mike Williams signed a new deal that keeps him with the Chargers through 2024. Keenan Allen is also signed through 2024.