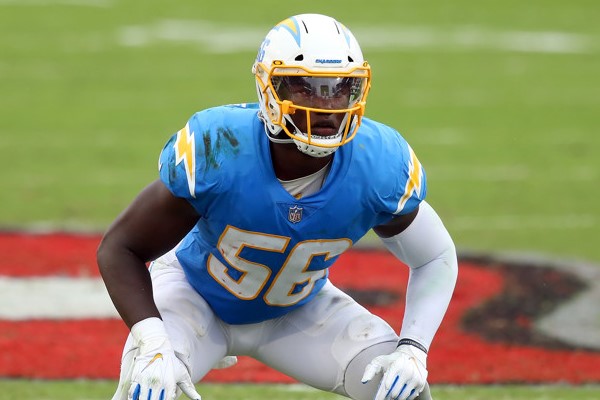 The Chargers on Monday activated LB Kenneth Murray from the PUP list. He opened training camp there after having surgery in April on the injured ankle that ended his 2021 season. The former 1st-round pick is no lock to reclaim a staring job this season after struggling through his 1st year under HC Brandon Staley. Kyle Van Noy and Drue Tranquill have looked like the top 2 non-edge LBs for the Chargers.

Tranquill out, Murray back vs. Vikings

Chargers LB Drue Tranquill has landed on the COVID list and will miss Sunday's game against the Vikings. His place in the lineup will be taken by Kenneth Murray, who returns from IR. Murray missed the past 5 games with an ankle injury. The Los Angeles Times reports that Murray is expected to be activated Saturday.

The Chargers on Monday placed LB Kenneth Murray on IR. He sustained an ankle injury in Saturday's practice that initially had him questionable for Monday night's game against the Raiders. The team then downgraded him to out on Sunday. Getting him on IR ahead of their Week 4 game starts the counter earlier for Murray to return, and we're guessing it'll be a short-term stay. That said, Murray was struggling before the injury. He's fine to drop for immediate help in most redraft IDP leagues.

Update: NFL Network's Ian Rapoport reports that Murray will "likely" be back after 3 games.

The Chargers have downgraded LB Kenneth Murray (ankle) to out or Monday night's game against the Raiders. Murray shouldn't have been in your IDP plans anyway, after playing just 51% of the snaps in Week 3. Kyzir White is the top option among Chargers LBs if you still have a spot to fill in your Week 4 lineup.

Chargers LB Kenneth Murray suffered an ankle injury in Saturday's practice and is questionable for Monday night's game against the Raiders. A healthy Murray played just 51% of the snaps in Week 3, so he should be easy to leave out of your Week 4 IDP lineup. Kyzir White becomes a better play, after leading Chargers LBs in snaps last week.