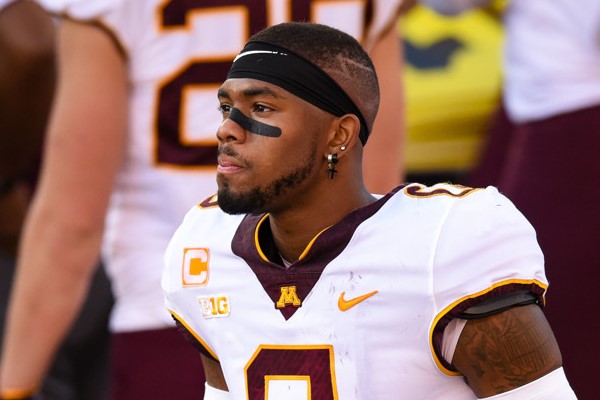 – GM Eric DeCosta had some good things to say about Bateman at the Scouting Combine in March: “The thing I’ve been impressed [about] with Rashod [is] his route running, [he has] very, very good hands and his attitude this year – his ability day-in and day-out to compete, to learn the offense, to challenge the defensive backs every single day, and he made plays when he had the chance. He’s very strong to the football. We think he’s going to make a big, big jump this year in his second year, and we’re very excited for his future.”

– After the team traded Marquise Brown on Night 1 of the NFL Draft, DeCosta added that Bateman “has had a tremendous offseason so far.”

– In his final college season, Bateman led all Power 5 WRs in yards per route run from the outside, according to Pro Football Focus.

– He needed August surgery for a groin injury and missed the team’s first 5 regular-season games (as well as the final 3 of the preseason).

– Bateman garnered 6+ targets in 5 straight contests once he did get onto the field as a rookie. He drew 15.3% target share over the 12 games he played.

– Bateman’s playing time dipped in the middle of that span, but he rebounded to exceed 80% snap share in each of his final 4 games – his 4 largest playing-time shares of the year.

– Bateman’s rookie-year average target depth checked in between 8.8 and 9.6 yards, depending on the source. Both numbers fell 4+ yards short of the average for his college career. Marquise Brown also exceeded both numbers by a decent amount in each of his 3 Ravens seasons. So there’s upside in that area.

– Though he spent ample time both inside and outside as a college receiver, Bateman worked almost exclusively outside as an NFL rookie: 81.7% of routes, according to Pro Football Focus. That position also tends to support deeper ADOT.

– Lamar Jackson posted his lowest PFF passing grade and NFL passer rating of the past 3 years in 2021, leaving rebound potential in his passing performance.

– The departures of Brown and Sammy Watkins leave behind 31.9% of WR target share from last year’s team.

– The Ravens went from 2 straight years of just 44% passing on offense to 56.4% last season, which began with the team losing its top 3 RBs to training-camp injuries. That leaves a wide range of potential outcomes for 2022’s pass-run split.

-- The Athletic's Jeff Zrebiec highlighted WR Rashod Bateman among his "stock up" players through the 1st week of training camp. "He consistently made plays in all areas on the field and cut out the drops that were happening too often in minicamps," Zrebiec wrote.

It’s difficult to know how much we should expect the Ravens to throw this year. They appeared ready to pass more heading into last season, with moves such as the Bateman selection and Sammy Watkins signing. But then Marquise Brown requested a trade, reportedly because the offense was too run-heavy – despite 2021’s swing. If Baltimore stays close to its 2022 passing rate, then Bateman’s target-volume upside climbs well beyond where we have him projected. Even if they swing further back toward pre-2021 levels than we’ve predicted, there’s room for Bateman to deliver WR3-level fantasy numbers. As long as summer hype doesn’t push him higher than mid-WR3 ADP, the 2nd-year man will make for an intriguing selection.

Ravens WR Rashod Bateman is making good progress in his recovery from November foot surgery, HC John Harbaugh said Thursday. "He's going to be ready to soon run at full speed," Harbaugh said. Bateman flashed early this past year with 2-59-1 and 4-108-1 lines to open the season, but a Lisfranc injury to his left foot limited him to just 4 more games the rest of the way. It doesn't sound like that'll be an issue in 2023, though, setting up the 23-year-old Bateman as an intriguing post-hype sleeper. We'll see who Baltimore hires at OC and if that new OC opens up the passing game.

Ravens HC John Harbaugh announced Thursday that WR Rashod Bateman will have season-ending surgery for the Lisfranc injury to his left foot. That leaves Devin Duvernay and Demarcus Robinson as the team's top 2 wideouts. ESPN's Adam Schefter reports that WR DeSean Jackson is also expected to be active for Monday night's game against the Saints. Rookie TE Isaiah Likely should see more opportunities as well, even after Mark Andrews is healthy. Losing Bateman certainly doesn't help QB Lamar Jackson, who's passing numbers have dipped since Bateman originally went down against Buffalo.

Bateman out 'a few weeks'

Ravens HC John Harbaugh says WR Rashod Bateman will miss "a few weeks" with the foot injury he aggravated in Thursday night's win over the Buccaneers. That span does include the team's Week 10 bye, so we'll see just how many games he misses. Although it's been frustrating to this point -- thanks primarily to the foot injury -- we'd hang on to Bateman where it makes sense. Baltimore has the 2nd-best remaining schedule for WRs. That finishes especially nicely: at Pittsburgh, at Cleveland, vs. Atlanta and vs. Pittsburgh weeks 14-17.

After missing 5 games in 2021, Bateman sat out 11 more in 2022. We still like the skill set here, but there’s a lot to prove in year 3. We’ll also see if Baltimore can lock up Lamar Jackson long-term.