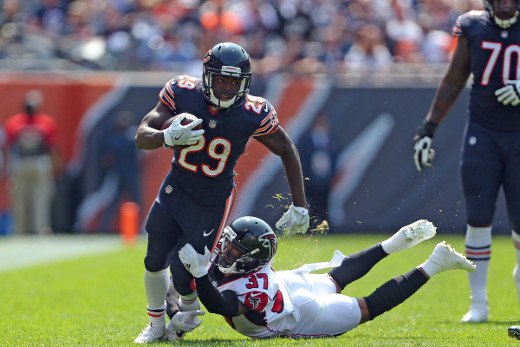 Cohen has been a high-volume receiver so far but with low efficiency and mediocre talent. Chicago didn’t add anything particularly impressive to the position this offseason, but there’s a chance either Damien Williams or rookie Khalil Herbert takes a big chunk out of Cohen’s workload.

We’ll also need to watch the status of his knee through training camp. All told, Cohen just doesn’t carry the upside to be worth much risk. He’s fine as a late-round best-ball option, but we’d rather pass on him for a RB with a higher ceiling in lineup-setting formats.

The Bears placed RB Tarik Cohen on reserve/PUP. In other words, he’ll miss at least the first 6 games of the season. Chicago will move forward with David Montgomery and Damien Williams as the top-2 RBs. Montgomery should dominate the rushing work, with Williams acting as a change-of-pace/receiving back. Montgomery is in play as a mid-to-late Round 3 pick. Williams is a worthy late-round flier.

Bears HC Matt Nagy suggested Tuesday that RB Tarik Cohen is more "weeks away" than "days away" from returning from last September's torn ACL. Nagy added, "I don’t want to put a timeline (on it) ... It’s all going to be day-by-day on how much growth he has or improvement." We're still over 5 weeks away from Chicago's season opener. But it's beginning to look like Cohen will at least be limited to start the season -- if he's out there at all. He's nothing more than a late-round stab in PPR drafts right now. RB David Montgomery would get a boost if Cohen isn't ready come Week 1.

The Bears have placed RB Tarik Cohen on the active PUP list to start training camp. Cohen is still working back from last September's torn ACL and was reportedly hobbled during spring workouts. We're guessing he'll be available for the start of this season -- but it's certainly not a lock. We'll continue to monitor his progress. Cohen's absence would free up targets for RB David Montgomery. Chicago also added RB Damien Williams this offseason.

Bears HC Matt Nagy announced Monday that RB Tarik Cohen has a torn ACL and will miss the rest of the 2020 season. He ran 54 pass routes and garnered 9 targets through 3 games. Most of that work now figures to go to RB David Montgomery.

The Bears "fear" a torn ACL for RB Tarik Cohen, according to NFL Network's Ian Rapoport. These reports almost always end up being confirmed, so expect Cohen to miss the rest of the season. That should mean more pass-catching work for RB David Montgomery. Cordarrelle Patterson also becomes a potential deep-league stash. He's tallied 15 carries and 4 catches through 3 games.