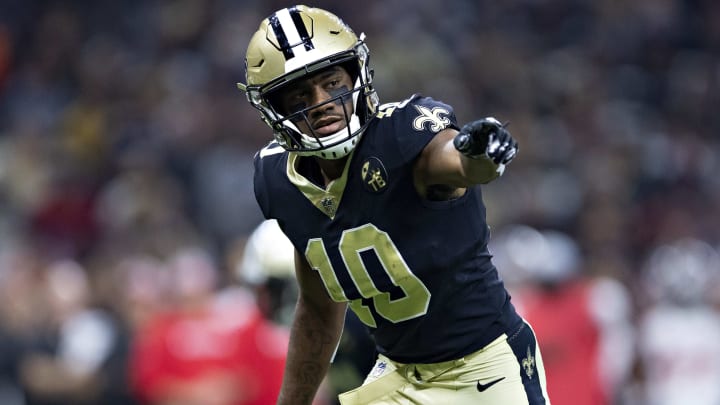 -Smith benefited from an injury-riddled year from Michael Thomas. The former scored 4 times, adding career-highs in catches (34) and yards (448).

-In the postseason, he tallied 3-85-2 against Tampa Bay, catching a 56-yard TD from potential Week 1 starter Jameis Winston.

-Smith was used as a short-range target for Drew Brees for the 2nd-straight season. He’s posted a 9.6-yard average depth of target in 2 straight seasons.

-Emmanuel Sanders departed in free agency. A chunk of the 82 targets he leaves behind will shift to Smith.

-Smith's main competition for the #2 role will come from 2nd-year UDFA Marquez Callaway. He’s an intriguing athlete standing 6’1, 205 pounds, but his college production (92-1,646-13 across 4 years) wasn’t great at Tennessee.

-2021 is a contract year for Smith. His 4th season looks like a make-or-break one if he wants to stick as a starter.

-Winston will battle Taysom Hill for the Week 1 starting job. Hill started 4 games in place of Drew Brees last year. But Ian Rapoport of NFL Network believes Winston is the favorite to start entering the summer.

-Smith would likely benefit if Winston is indeed the starter, as the former Buc boasts more arm strength (and a more aggressive game) than Hill.

-The Saints figure to remain balanced on offense. Running out a solid defense, New Orleans ranked 28th in pass rate a year ago. In other words: It’s imperative Smith grabs the #2 role.

Smith heads into the summer as the favorite to start alongside Michael Thomas. The 27-year-old has the size and speed to thrive in a deep role, but he’ll need whoever wins the starting QB job to cooperate.

Even then, Smith looks like a fringe #3 option behind Thomas and Alvin Kamara. Adam Trautman is certainly a breakout candidate in year 2.

For summer drafts, Smith is just a late-round option with the potential to supply several starting weeks.

Saints WR Tre'Quan Smith (ankle) has been activated from IR. So he'll return for Sunday's game against the Bucs after missing the last 3. Smith figures to re-join Michael Thomas and Emmanuel Sanders in 3-WR sets and has some appeal as a cheap DFS play.

Smith back at practice

Saints WR Tre'Quan Smith (ankle) returned to practice on Wednesday. He's eligible to come off IR for this weekend's game vs. the Bucs, although it's still unclear if he'll be ready. We'll keep you updated.

Smith out for Week 16

Saints WR Tre'Quan Smith (ankle) is out for Friday's game vs. the Vikings. With WR Michael Thomas on IR, New Orleans is down to Emmanuel Sanders and some combination of Marquez Callaway, Lil'Jordan Humphrey and Juwan Johnson at WR.

Saints WR Tre'Quan Smith (ankle) did not practice on Tuesday. Fantasy owners shouldn't be counting on him to play vs. the Vikings on Friday. Smith's absence would leave Emmanuel Sanders as New Orleans' clear-cut #1 WR.

Saints WR Tre'Quan Smith injured his ankle in the 3rd quarter of Sunday's game against the Chiefs and is officially questionable to return. We'll pass along an update when we get one.