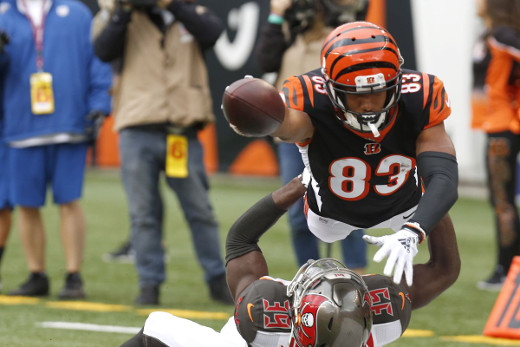 -Boyd continued to be used as a primary slot target on short-range passes (8.8-yard average depth of target).

-The rough end to the season found Boyd finish as the WR38 in PPR points per game (15 games).

-Burrow, of course, went down with a serious knee injury in late November. The good news is he’s expected to suit up for Week 1.

-Fortunately for Boyd, the Bengals remain without a pass-catching TE. The same coaching staff (HC Zac Taylor and OC Brian Callahan) return after leading the league in 3-WR sets (76%).

-Boyd can offset any volume concerns by remaining highly efficiency alongside Burrow. The pair combined for a 79% catch rate last fall.

Only 26, Boyd has delivered as an undervalued fantasy asset for 3 straight seasons. He reached 1,000 yards in 2018 and 2019 and would have hit that threshold if not for Joe Burrow’s season-ending injury.

Burrow holds the key to Boyd returning reliable WR3 value in 2021. And as of early summer, the young QB is fully expected to suit up come Week 1. We’re buying pieces of an ascending Bengals offense, and Boyd is no exception.

Bengals WR Tyler Boyd (concussion) returned to a limited practice on Wednesday, giving him a shot to play vs. the Ravens this weekend. We'll monitor his progress over the next couple of days.

Boyd out for Week 16

The Bengals have ruled WR Tyler Boyd (concussion) out for Sunday's game against the Texans. That positions Tee Higgins as the clear #1 WR against a bad Houston secondary. Cincinnati will also get QB Brandon Allen back. The Bengals left him off the final injury report for the week after Allen missed Week 15 with a knee injury. Allen is nothing special but raises the passing-volume ceiling. Higgins looks like a decent WR3 for Week 16.

Bengals WR Tyler Boyd (concussion) did not practice on Wednesday. He seems like a long shot to be cleared in time for Sunday's game vs. the Texans. Boyd's absence would boost WR Tee Higgins' target projection -- but he'd remain a shaky fantasy play given Cincinnati's QB situation.

Bengals WR Tyler Boyd left Monday night's game against the Steelers with a concussion. He'll need to pass through the league protocol to be eligible to play Sunday at Houston. Having 1 less day than the normal week certainly won't help. Fortunately for fantasy decisions, Boyd has been a shaky option since QB Joe Burrow went down.