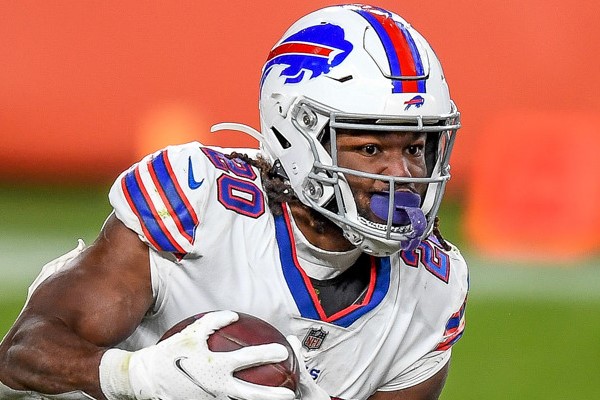 Week 10
After leaving the game against the Jaguars a week ago, Moss saw 7 carries for 27 yards and a TD against the Jets. His 7 total opportunities trailed Devin Singletary with 8 and was right in front of Matt Brieda, who had 6.

The Bills seemed to be working in Moss slowly as he didn't see a target for the first time since Week 4. In fact, Moss had 4 or more targets in each of the last 4 weeks.

Going forward, Moss should see his passing work come back. But if he continues to share time not only with Singletary but with Breida as well, all 3 Buffalo RBs could be very hard to deploy in most fantasy leagues. Moss definitely has the most upside both from a passing volume and TD standpoint.
Week 9
Moss suffered a concussion in Week 9, leaving his Week 10 status in question. Before departing, Moss was stuffed at the goal line and had a smokin’ goal line target fired just beyond his reach. Needless to say, it was an off day from Josh Allen on a day that Buffalo scored only 6 points. If Moss is cleared for Week 10, he’ll get a plus matchup against the Jets. Buffalo’s currently implied for 30.3 points in that one.
Week 8
Devin Singletary started Sunday’s win over Miami. Moss would get his touches, though, finishing with 15 vs. just 8 for Singletary. Moss, in fact, garnered an easy career-high in targets (7) and catches (6). That stemmed from a Miami pass D that made it a point to limit damage on deep balls. Entering Sunday, Moss caught no more than 3 passes in a game, so consider Sunday more of an outlier than a sign of things to come. Moss will look to snap a 3-game scoreless streak Sunday against a hapless Jags squad. Then comes another strong matchup at the Jets.
Week 4
Although he split touches equally with Devin Singletary, for the 2nd week in a row, Moss led the backfield with a 56% snap share. Aside from scoring on a short rushing TD, he was open for a potential second score on a screen pass at the goal line, but Josh Allen threw the ball behind him. Overall, he was facing an inferior defense, and although he was unable to break many chunk runs, he was able to run for 4 yards per carry.

After being deactivated in Week 1 and then having a limited role in Week 2, Moss has averaged 15 touches over his last 2 games while scoring a TD in each contest. It’s dangerous to assume his role will be stable because it seems apparent that Devin Singletary isn’t going away. But both guys are playing well, so they should continue to split work, which hopefully means double-digit touches and RB3 value.
Week 3
Moss had a strong performance both as a rusher and a pass catcher on Sunday. He gained 60 yards on 13 rush attempts, plus an additional 31 yards and a TD on his 3 receptions.

Going forward, this backfield remains a mess. Moss was clearly the preferred option against Washington, seeing 16 opportunities to Devin Singletary’s 12. Last week, however, the roles were reversed as Singletary saw 16 opportunities to just 10 for Moss. And you aren't able to point to game script being the defining factor as both games were dominant wins.

While either guy could be a usable option from a fantasy perspective, Buffalo being unwilling to pick a guy week in and week out makes it hard to deploy either Bills RB. Both can be used in a pinch -- but good luck feeling great about it.
Week 2
Moss made his 2021 debut against Miami. After seeing his 1st action on Buffalo’s 3rd drive, Moss went on to post 26 yards and 2 scores on 8 carries. He lost a fumble early but wasn’t benched. Just note that 5 of his carries (and both TDs) came in the 2nd half, with Buffalo enjoying a hefty lead. Devin Singletary led the way with 13 carries, 82 yards and a long TD run and still looks like Buffalo’s lead back. But Moss should at least be stashed in leagues of 12+ teams.

The Bills selected Moss in Round 3 of the 2020 draft, just 1 year after spending a 3rd on Devin Singletary. Despite missing 3 games last season, Moss looks poised for lead back duties this fall.

He brings a size advantage over Singletary (5’9, 223 pounds vs. 5’7, 203), and we’ve seen the Bills favor that size in the red zone. Moss also emerged late in his rookie year, handling 38 carries to Singletary’s 25 from Week 13 to Week 15. The Bills rested starters in a Week 17 blowout; Moss suffered an ankle injury during Wild Card weekend.

Bills RB Zack Moss is a healthy scratch for today's game vs. the Bucs. It's not a surprise with the power running game unlikely to be a big part of Buffalo's game plan today. Devin Singletary and Matt Breida will handle backfield duties for the Bills, but neither is a good fantasy bet.

Bills RB Zack Moss is active for tonight's game vs. the Patriots after getting healthy scratched last week. He joins Devin Singletary and Matt Breida in the backfield. Buffalo figures to run it more tonight than usual in snowy and windy conditions.

Bills RB Zack Moss is a healthy scratch for tonight's game vs. the Saints. Buffalo will roll with RBs Devin Singletary and Matt Breida. "I think it'll be a 1A/1B situation unless someone gets hot," The Athletic's Joe Buscaglia wrote, labeling Singletary the 1A. In a matchup vs. the league's top-ranked RB defense, consider Singletary and Breida just RB3 or flex options.

Bills RB Zack Moss (concussion) is active for today’s game vs. the Jets. He figures to continue splitting backfield work with Devin Singletary, leaving both guys as just RB3 or flex plays.

Bills RB Zack Moss has cleared the concussion protocol, according to NFL Network's Ian Rapoport. Barring a setback, Moss will be available for Sunday's game vs. the Jets. He had been operating as Buffalo's lead back but was out-carried 5 to 3 by Devin Singletary before exiting last week's loss to Jacksonville. Moss and Singletary both look like RB3s with upside vs. the Jets tomorrow.