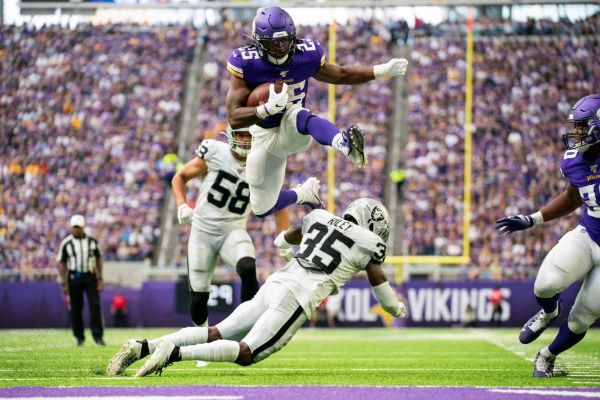 Vikings RB Alexander Mattison has been activated from the COVID list. He'll be back to give RB Dalvin Cook a few breathers in Sunday's game vs. the Rams.

The Vikings have placed RB Alexander Mattison on the COVID list. They also claimed RB Wayne Gallman off waivers from the Falcons. These moves shouldn't really matter for fantasy football purposes, with Dalvin Cook back. But we'll keep our fingers crossed that Mattison's COVID situation doesn't affect Cook as well.

Vikings RB Alexander Mattison (concussion) isn’t listed on the final injury report after putting in a full practice on Friday. He figures to operate as Minnesota’s lead back in a dream matchup vs. Detroit’s 31st-ranked RB defense this weekend.

Vikings RB Alexander Mattison (concussion) got in a limited practice on Wednesday. His status, of course, has taken on increased importance with RB Dalvin Cook out for Week 17. If Mattison can clear protocol, he should operate as Minnesota's lead back in Sunday's dream matchup vs. Detroit's 31st-ranked RB defense.

Mattison out for Week 13

The Vikings have downgraded RB Alexander Mattison to out for Sunday's game against the Jaguars because of an illness. That elevates Ameer Abdullah to the #2 RB spot for the game -- according to the team's "unofficial" depth chart. That probably doesn't mean a lot of work for Abdullah (or Mike Boone). Perhaps losing Mattison keeps more touches on Dalvin Cook's plate. Ultimately, we wouldn't alter fantasy-lineup plans on this news.

Update: Mattison had an appendicitis and underwent successful surgery, according to NFL Network's Tom Pelissero. Mattison might end up missing more than just this week's game.