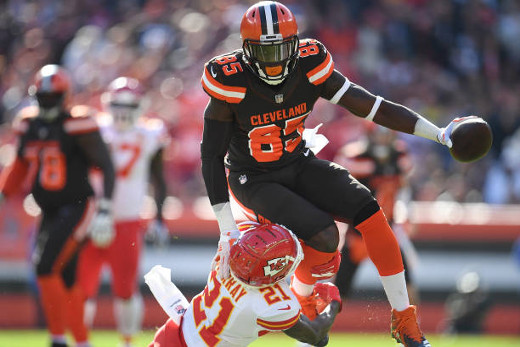 Njoku questionable for Divisional Round

Browns TE David Njoku (hamstring) got in just 1 limited practice this week and is listed as questionable for Sunday's game against the Chiefs. He shouldn't be in any fantasy lineups, but his absence would free up some opportunity for Cleveland's other pass-catchers. Njoku has averaged 3 targets per game over the past 5 weeks.

Njoku back for Week 5

Browns TE David Njoku (knee) will be activated from IR and return for Sunday’s game against the Colts. Njoku posted a 3-50-1 line on 3 targets back in Week 1. He’s not a bankable fantasy play this week but puts a significant dent in TE Austin Hooper’s stock.

The Browns have placed TE David Njoku on IR with a knee injury. He's out for at least the next 3 weeks. Njoku played 23% of the offensive snaps and saw 3 targets in the opener, so his absence is a slight boost for TE Austin Hooper.

Browns TE David Njoku has requested a trade, ESPN's Adam Schefter reports. We're frankly surprised it took this long after Cleveland handed TE Austin Hooper a big 4-year, $44 million deal in free agency (and added Florida Atlantic TE Harrison Bryant in the 4th round of this spring's draft). Njoku's 2019 campaign was ruined by a broken wrist in September. But the former 1st-round pick turns just 24 later this month and compiled 88 catches, 1,025 yards and 8 TDs over his first 2 NFL seasons. He should garner plenty of interest on the trade market. Now might be a good time to buy Njoku in your dynasty leagues.

Browns TE David Njoku is a healthy scratch for the 2nd straight game today. It's been a lost season for the 23-year-old.