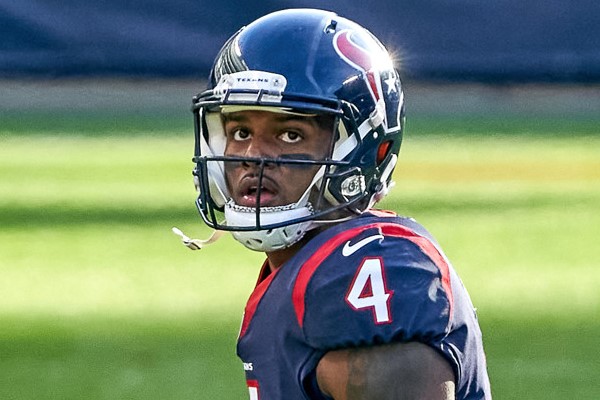 Watson won't be traded before deadline

Texans QB Deshaun Watson won't be traded before today's deadline, according to multiple sources. Miami was seemingly the only team really in the mix, but NFL Network's Ian Rapoport hears that Dolphins owner Stephen Ross didn't feel comfortable making the trade. So Watson will remain a healthy scratch for the Texans for the rest of the season. And QB Tua Tagovailoa will finish out this year as Miami's starter.

Trade talks between the Texans and Dolphins for QB Deshaun Watson are "heating up," according to insider Aaron Wilson. The 2 sides are hoping to get a deal done before the November 2 trade deadline. Watson will waive his no-trade clause for a move to Miami, which has been his preferred destination all along. Houston, meanwhile, is looking for three 1st-round picks and two 2nd-round picks or players, per Wilson. We'll see where this goes -- and then when Watson is cleared to play amid all his legal issues. We'd still only stash Watson on fantasy rosters at this point if you have a roster spot to play with.

Watson a healthy scratch all season?

The Texans are prepared to make QB Deshaun Watson a healthy scratch all season, insider Aaron Wilson reports. Watson isn't going to play for Houston -- and no trade is "imminent," per Wilson. This was always a distinct possibility, between Watson's issues with the Texans organization and his legal troubles. QB Tyrod Taylor will open the season as Houston's starter.

Watson to be eligible for all of 2021 season?

Yahoo's Charles Robinson believes QB Deshaun Watson might be eligible to play the entire 2021 season. It's a complicated situation between the criminal investigation and NFL. But basically, the league is unlikely to suspend Watson or place him on the Commissioner's Exempt List until a grand jury decides whether to indict him. "The NFL knows multiple bodies are conducting criminal investigations and that is what is ultimately keeping the league from requesting Watson to sit down to be questioned in the NFL’s probe," Robinson writes. "Simply put, the longer Watson’s criminal investigations linger without a conclusion, the longer he will be able to stay on a football field. Possibly for the entirety of 2021." Of course, Watson still needs to find a team willing to play him. He remains just an end-of-draft flier.

Texans QB Deshaun Watson returned to practice Monday morning. He had opened camp working out with the team but then sat out the next 5 days with what the team reported was a foot injury. This comes a few days after FOX's Jay Glazer reported that Houston isn't returning calls from potential trade partners. That paired with Watson's return to the field just might indicate that no deal is imminent. Of course, there are a lot of unknowns in play here, and the Texans aren't giving anything away. Watson remains a risk/reward pick in the later rounds of all draft formats for now.