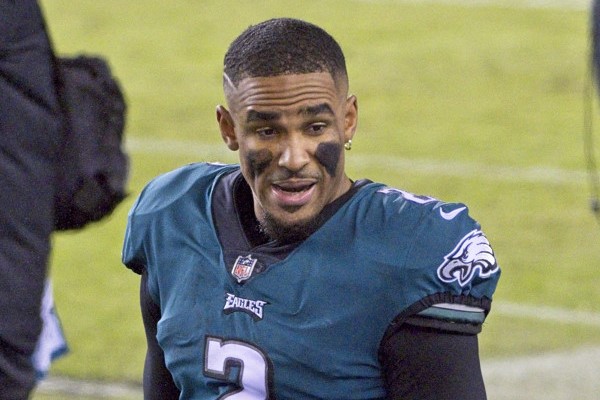 Eagles QB Jalen Hurts (ankle) is officially inactive for today’s game vs. the Jets, according to ESPN’s Adam Schefter. QB Gardner Minshew gets the start and is a viable play in 2-QB and Superflex leagues against the #31 QB defense. The Eagles still figure to lean on their running game in this one.

Hurts likely out vs. Jets

Eagles QB Jalen Hurts has been downgraded to out for Sunday's game against the Jets, according to Eagles writer Derrick Gunn. That will make Gardner Minshew the starter. Gunn adds that RB Boston Scott will be a game-time decision. Scott is dealing with an illness that kept him out of practice all week. With Jordan Howard ruled out, Miles Sanders could be in for a bigger-than-normal workload in 1 of the league's most favorable matchups for RB scoring.

Update: ESPN's Adam Schefter reports that Hurts "very well may be out" but that the team wants to "see how Hurts is feeling" Sunday before making a final decision on his status. It still sounds like you should make alternate plans at QB if you had been planning to use Hurts.

Eagles QB Jalen Hurts (ankle) is "up in the air" for Sunday's game vs. the Jets, according to NFL Network's Ian Rapoport. Rapoport suggests that Hurts will be a game-time decision and says "there's a chance" QB Gardner Minshew gets the start. The good news for fantasy owners is that we'll find out whether Hurts is active around 11:30 am ET tomorrow. He'll obviously carry more risk than usual in fantasy lineups if he ends up playing.

Eagles QB Jalen Hurts (ankle) is listed as questionable for Sunday’s game vs. the Jets. He was limited in practice all week. HC Nick Sirianni said Friday morning that Hurts’ status is “an unknown.” We’ll continue looking for updates on Hurts and will find out whether he’s active around 11:30 am ET on Sunday. QB Gardner Minshew would start for Philly if Hurts can't.

Eagles QB Jalen Hurts (ankle) remained limited in Thursday's practice. He's expected to play vs. the Jets this weekend, but it'd be nice to see him get in a full practice on Friday.