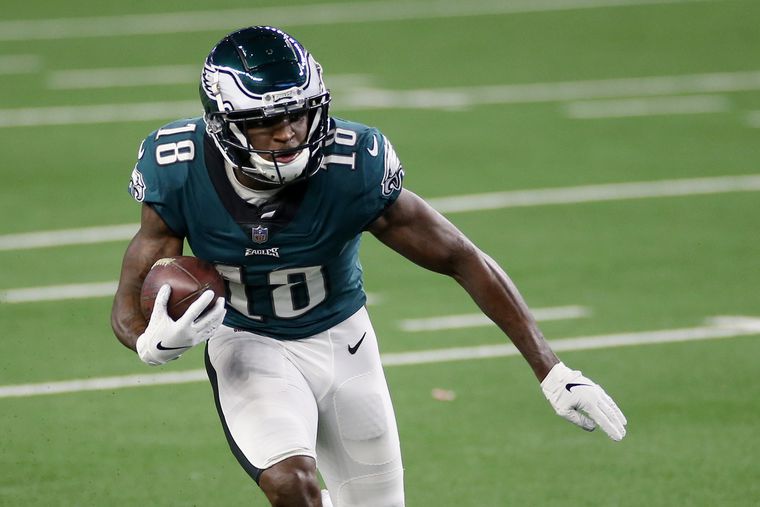 Eagles WR Jalen Reagor (ankle) isn’t listed on the final injury report after putting in a full practice on Friday. He’ll play on Sunday but isn’t a viable fantasy option vs. the Chargers’ top-ranked WR defense.

Eagles WR Jalen Reagor (ankle) did not practice on Wednesday. We still don't have any details on his injury, but we're not expecting him to play against the Chargers this weekend. Reagor has averaged just 4 targets per game this season, so his absence won't have a big fantasy impact.

Eagles WR Jalen Reagor injured his ankle in the 1st half of Sunday's game vs. the Lions. He's officially questionable to return but was carted back to the locker room. We'll update his status when we know more.

Update: Reagor has been ruled out.

Reagor not off to great start

Eagles WR Jalen Reagor could use a strong training camp after a lackluster debut season, but it doesn't sound like things are going particularly well for him. The Athletic's Bo Wulf says Reagor has been "underwhelming" so far and hasn't capitalized on any extra opportunity afforded by DeVonta Smith's knee sprain. "Travis Fulgham, Quez Watkins and John Hightower have each made more splashy plays since Smith's absence, and J.J. Arcega-Whiteside and Greg Ward have been steadier," Wulf writes. He adds that it's "hard to imagine" Reagor not claiming a starting spot come the regular season, but we'd obviously like to hear better things about the 2020 first-round pick. Reagor belongs in the later rounds of drafts -- where his ADP has been so far -- until something changes.

Reagor out with concussion

Eagles WR Jalen Reagor sustained a concussion in the 1st half of Sunday night's game against Washington. It ends a disappointing and injury-riddled rookie campaign that saw Reagor finish with 31 catches, 396 yards and 1 TD in 11 games. He'll have every opportunity to capture a big role in the passing game in 2021.