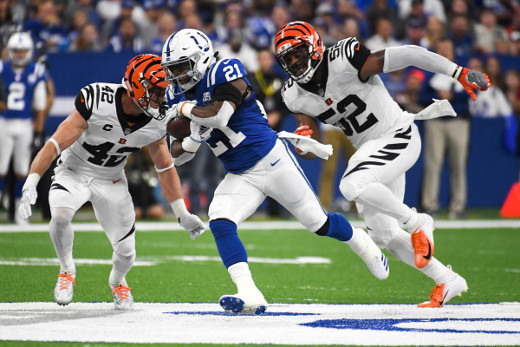 The Colts have had “multiple conversations of late” with reps for RB Nyheim Hines, per The Athletic. The 24-year-old is entering a contract season. He’s yet to miss a game as a pro, and it sounds like he wants to continue that trend as a Colt. “I hope to be the Darren Sproles of Indy,” Hines said via The Athletic. “The Nyheim Hines of Indy. I’m really driven to leave a legacy. That’s something I think about every day.” Our current projections have Hines for only 73 carries, but his reception upside puts him in the PPR flex conversation.

Hines to get "bulk" of the carries?

NFL Network's Ian Rapoport says "don't be surprised" if RB Nyheim Hines gets the "bulk" of the Colts' carries against the Packers today. Hines is coming off a breakout game last week -- and it sounds like the Colts want to ride the hot hand. This still figures to be a fluid situation with RBs Jonathan Taylor and Jordan Wilkins in the mix, but Hines looks like the best fantasy play among the 3.

Hines "has been everywhere" in camp

Colts RB Nyheim Hines "has been everywhere" in camp, The Athletic's Zak Keefer writes. "I’ve never seen Hines this active in the offense," Keefer continues. "It’s probably not a stretch to say the third-year running back has caught more passes from [QB Philip] Rivers than anyone else. They’ve been mostly screen passes and dump-offs, but it’s likely a snippet into some of what we’ll see this season. Instead of throwing the ball away, Rivers will look for Hines. And Hines will look for space." Hines has very little rushing upside and was inefficient in the passing game last year. But volume trumps all. And if Hines is going to see a bunch of targets, he'll be useful in PPR leagues.

The Colts selected North Carolina State RB Nyheim Hines in the 4th round of the 2018 NFL Draft. Hines blazed a 4.38-second 40 time at the Combine and plays just as fast. He averaged 5.4 yards per carry and 10.5 yards per catch over his 3-year college career, while also scoring 3 times in the return game. Hines goes just 5’8, 198 pounds and never reached 200 carries in a season at N.C. State. But he caught 20+ balls in all 3 campaigns, including 43 in 2016. He has the look of at least a pass-catching, change-of-pace asset as a pro, with the potential to emerge as a committee back on the Gio Bernard-Duke Johnson spectrum. He joins Marlon Mack in a relatively wide-open Colts backfield. Mack looks like the early favorite to lead the team in carries, but there’s plenty of room for Hines to carve out a significant role.