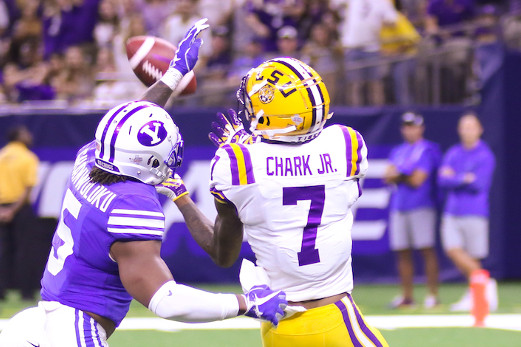 Chark was a 4-star recruit out of high school but didn’t record a single reception across his first 2 seasons in Baton Rouge. His only touch during that time was a 79-yard TD on an end-around against Texas Tech in the 2015 Texas Bowl.

Chark improved his numbers across the board this past season, pacing LSU in all major receiving categories. His 21.9 yards per catch led the entire country among players with 40+ receptions. He made another 6 catches of 40+ yards.

And Chark was efficient, posting 2.92 yards per route run this past year — 12th among draft-eligible receivers, per Pro Football Focus. His 12.85 yards per target towered above the 7.63 mark posted by the rest of LSU’s pass-catchers. That 68.4% difference was 2nd best among 25 of this year’s top WR prospects.

Chark also contributed on the ground, tallying 185 yards and 3 scores on 24 carries over the past 2 seasons. And he served as LSU’s punt returner last year, averaging 10.6 yards and scoring twice on 18 attempts.

He closed his college career with a bang, earning co-MVP honors at the Senior Bowl with a 5-160-1 line. That included a 63-yard reception and a 75-yard TD.

Courtesy of DraftBreakdown.com, Cut Up Corner and Cityzen 225

Chark has a sprinter’s body: long and lean. And he runs with big strides, effortlessly gliding by defenders. He plays like a guy with 4.3 speed.

Chark also shows the ability to adjust to passes that aren’t thrown on the money.

The vast majority of Chark’s production in the 5 games I watched came on deep balls. The rest came via the threat of his long speed — a good number of comebacks and a few out routes.

While Chark’s speed will play at the next level, he has a lot of work to do in the route-running department.

Inconsistent hands are another concern. I saw him make a few impressive grabs, including these 2:

But he far too often lets the ball get into his body, resulting in ugly drops like this:

Chark is much more athlete than WR at this point.

He was a Combine winner, not only running a 4.34-second 40-yard dash but also posting vertical and broad jumps above the 90th percentile at his position.

He’s a good bet to contribute in the deep-passing and return games for his NFL club. But that alone won’t be enough to make him more than a volatile, low-floor fantasy option.

Chark will need to improve his hands and develop as a route runner in order to reach his ceiling. And even that only extends as high as the Robby Anderson-DeSean Jackson spectrum — a boom-or-bust WR3 type.