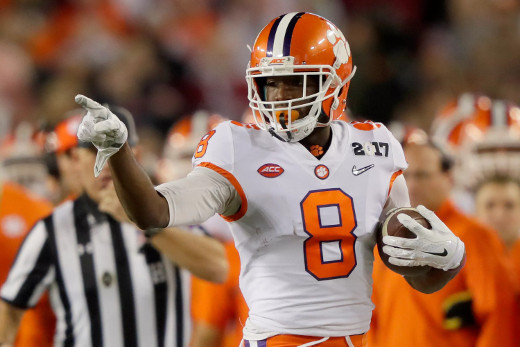 Rated as a 5-star recruit by some services, Cain turned in a promising-but-troubled true freshman season at Clemson. He led the team with a 17.1 yards-per-catch average, ranked 3rd in both receiving yards and TDs and finished 4th in catches. That was despite missing 3 games for disciplinary reasons — at least 2 of which were for failed drug tests.

Cain stayed clean in 2016 and boosted his numbers across the board. The production looks less impressive, though, when you consider that the Tigers finished top 4 in the country in completions, passing yards and passing TDs. Cain accounted for 9.0% of the team’s receptions, 14.5% of the yards and 20.0% of the TDs.

With QB Deshaun Watson off to the NFL, Clemson sunk to 39th in passing yards and 85th in TDs this past season. Cain still managed to set new career highs in catches and yards. He also posted personal bests in market share of receptions (18.8%), yards (22.3%) and TDs (35.3%).

Cain made plenty of explosive plays at Clemson. He has the burst off the snap to get behind CBs and the long speed to maintain that separation.

Clemson often used him on WR screens, especially in 2016 with Deshaun Watson. Cain is fluid in the open field, with subtle make-you-miss ability and plenty of giddy-up.

Cain is a serviceable route runner at the short and intermediate levels, but he’ll need to improve if he wants to become a do-it-all receiver in the NFL.

Where Cain struggles most is in contested situations. According to Pro Football Focus, he caught just 40% of his contested targets last year. He came down with just 2 of 7 chances in the 5 games I watched.

Cain’s hands are generally solid, but he did drop 2 balls among the 5 games I watched. Pro Football Focus charged him with 13 drops on 140 catchable targets (9.3% drop rate) during his 3-year college career.

Cain flashed some big-play ability on film, both on deep routes and after the catch. And it’s certainly worth noting that Clemson has produced a plethora of successful NFL WRs over the last handful of years (DeAndre Hopkins, Sammy Watkins, Martavis Bryant).

Cain doesn’t boast the same measurables as those guys, though. He’s a middling 6’2, 202-pounder who registered a 29th percentile SPARQ score.

Throw in the off-field concerns, and it’s tough to like Cain as more than a late-round flier in dynasty rookie drafts.