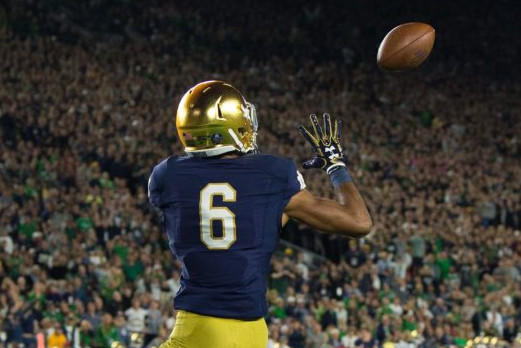 After a quiet freshman season that was cut 4 games short by a shoulder injury, St. Brown emerged as QB DeShone Kizer’s top target in 2016. He led the team in all major receiving categories, accounting for 27.1% of the receptions, 31.5% of the receiving yards and 33.3% of the TDs.

The strong sophomore campaign landed St. Brown on the Biletnikoff Award Watch List heading into 2017. But his numbers tumbled alongside the Notre Dame passing game.

With Kizer off to the NFL, QBs Brandon Wimbush and Ian Book combined for just 2,326 passing yards and 20 TDs. Those marks ranked 100th and 63rd, respectively, among 130 FBS schools.

St. Brown still led the squad in catches and yards, while ranking 2nd in TDs to sophomore WR Kevin Stepherson’s 5. But his market share numbers dropped across the board: 18.1% of the receptions, 22.1% of the yards and 20% of the TDs.

St. Brown’s 1.70 yards per route run ranked a decent 37th among 133 draft-eligible WRs, according to Pro Football Focus. But he mustered only 6.96 yards per target — just a tad higher than the 6.51 mark posted by the rest of Notre Dame’s pass catchers. That 6.91% difference ranked just 20th among 25 of this year’s top WR prospects.

St. Brown is a fluid athlete for a man of his size. He’s smooth in and out of breaks …

… And he’s a weapon after the catch.

St. Brown did most of his damage at Notre Dame downfield, primarily on ‘go’ routes and posts. He was also effective on comebacks, selling the vertical threat and then coming back hard to the ball.

Outside of that, though, we don’t see him running a wide variety of routes. He’ll need to expand his tree at the next level.

While Pro Football Focus charged St. Brown with a mediocre 8.33% drop rate this past season, he’s generally a strong hands catcher with a large catch radius.

Where St. Brown disappoints most is in contested-catch situations. He flashes the ability to dominate with that 6’5 frame …

But he too often lets the ball get into his body, rather than high-pointing it. That negates the size advantage he holds over defenders.

It might be a lazy comparison because they hail from the same school, but there’s some Michael Floyd to St. Brown’s game. They’re both big, long, athletic WRs who do their best work downfield. St. Brown actually has a couple of inches on Floyd and ran just 1 hundredth of a second slower in the 40-yard dash.

Floyd, of course, has had an up-and-down pro career. His peak was a 1,041-yard campaign in his 2nd season. The valley has been 566 total yards for 3 different teams across the past 2 years.

St. Brown presents a similar range of outcomes. His combination of size and fluidity give him intriguing upside. But he’ll need to expand his route tree and improve in contested situations if he wants to reach that ceiling.

A poor 2017 campaign — due at least in part to shoddy QB play — figures to slash St. Brown’s price in both the NFL Draft and dynasty drafts. He’s certainly worth a look once you get into “why-the-heck-not?” territory.