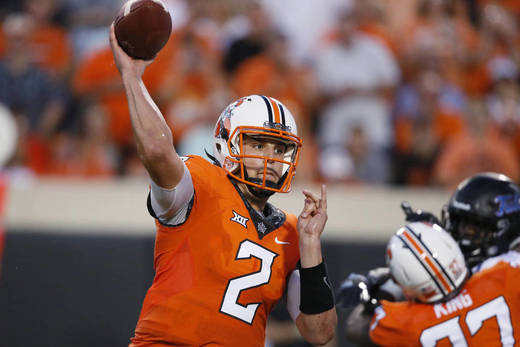 Rudolph was a star recruit from a football family. His dad played LB at UNC back in the 1980s, and his younger brother just completed his 1st season as a LB at Clemson. This Rudolph was a 2013 finalist for South Carolina’s Mr. Football before turning down scholarship offers from LSU, Ole Miss and heading to Oklahoma State.

Rudolph might have been on his way to a redshirt in 2014 but started the final 3 games after QB Daxx Garman went down. The true freshman averaged 284.3 yards over those 3 contests while tossing 2 TDs in each and piloting the Cowboys to a 2-1 record, to get to 7-6 for the season.

Rudolph stayed in the starter seat for the next 3 years, leading the 1st OSU teams to ever win 10+ games in 3 straight seasons. He improved his ball security, throwing just 15 INTs over his final 1,142 attempts after flinging 11 picks among his 1st 305.

The Cowboys QB finished 10th in the nation in passing efficiency in 2016 and then 3rd last season. After cracking 300 yards just 6 times in 2016’s 13 games, Rudolph averaged a nation-leading 377.2 yards per game as a senior. He fell short of 300 yards just twice and 2 TD passes only once (at Texas).

Pro Football Focus credited Rudolph with the 2nd highest percentage of positively graded throws among draft-eligible QBs in 2017. Rudolph also checked in 2nd in the class in passer rating and #1 on 3rd downs.

There’s plenty of variation near the top of this year’s QB rankings. That includes CBS pushing Rudolph all the way to #1 -- the only place I’ve seen that so far. PFF ranks him 4th. Otherwise, the question seems to be whether he’s 5th or 6th in the class.

Bucky Brooks has said on NFL Network’s “Path to the Draft” that some scouts view Rudolph as merely a Day 3 option. That notion doesn’t make a whole lot of sense to me.

You can tell by the top of this article that Rudolph sports prototypical size and brings a tremendous record of production. The arm doesn’t look special, but it’s enough -- especially when the Cowboys have him throw it deep …

Aside from the deep balls, Rudolph’s tape gets a bit boring. He certainly looks like a competent QB capable of getting the job done, but he also hails from a terrific situation. Oklahoma State’s version of the “Air Raid” offense helped propel Brandon Weeden and Zac Robinson to NFL stints that didn’t go anywhere, and the scheme has more famously produced lackluster pro QBs from Texas Tech.

Rudolph often threw quick passes to open receivers. He also benefited from playing with WRs James Washington and 6’4 Marcel Ateman, each of whom appears likely to get drafted this April. At the same time, PFF found Rudolph to be this class' 2nd-highest graded passer both out of a clean pocket and under pressure.

It’ll take film scouts much more seasoned than I am to decipher how much of Rudolph’s success was the system and how much his ability.

Rudolph won’t be a guy to chase in dynasty rookie drafts. That’s not necessarily a knock on him, though.

The deep-ball ability is exciting and can certainly help beef up his fantasy stats down the road. But even if he’s more than a product of his college system, Rudolph will likely need some adjustment time. He seems likely headed to a team late in Round 1 or somewhere in Round 2 that won’t need to him to start right away.

In the right situation, Rudolph appears capable of developing into a decent pro. But his rushing outlook matches much more closely with his limited college yardage than his inflated ground-TD totals. And he enters the league amid a loaded class of QBs.

The former Cowboy looks more like an eventual fantasy spot starter than a building block. That said, if Rudolph lands in a good spot for his long-term potential -- New Orleans and Pittsburgh look optimal right now -- he could make for an intriguing 4th-round stash for a dynasty roster with a veteran QB or 2 already in place.