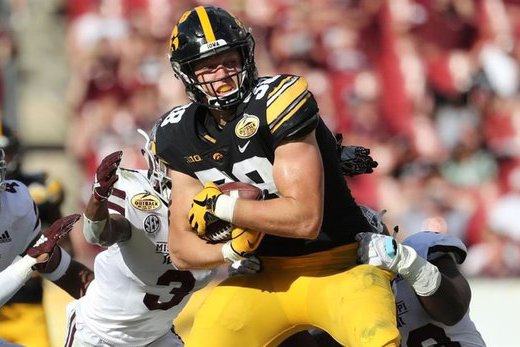 Hockenson arrived at Iowa as a 220-pound off a strong high school career, but who got just 2 other FBS-level scholarship offers (Iowa State and Eastern Michigan). He redshirted as a freshman while building up his body and then quickly proved foolish anyone who hadn’t believed in him.


Hockenson ranked 5th in receptions on a 2017 team that lost 3 of its top 4 finishers in that category from the year before. He trailed classmate Noah Fant in catches, yards and TDs, however, after Fant avoided a redshirt in his debut campaign. Hockenson enjoyed his biggest outing with a 5-catch, 71-yard, 2-TD effort in beating Ohio State. That marked the only game in which he topped 3 receptions.

Hockenson showed enough that season, though, to make the 2018 preseason watch list for the John Mackey Award. At the end of the year, he won it.

Iowa’s new leader at TE beat Fant by 10 receptions and 241 yards in 2018, trailing Fant’s team TD lead by 1. Hockenson led the team in receiving yards and trailed WR Nick Easley’s receptions lead by just 3. According to Pro Football Focus, Hockenson ranked 4th among FBS TEs in yards per route run, 8th in slot receptions, 9th in deep-ball receptions (20+ yards in the air) and deep-ball yards and 11th in slot yards.

As you might have guessed from those stats in the previous paragraph, Hockenson does pretty much everything well. The Hawkeyes lined him up in various spots, looked his way often and asked him to block plenty.

I started with last season’s Outback Bowl victory over Mississippi State, in which Hockenson stayed quiet for 3 quarters. Then he did this with his 1st reception of a close game in the 4th …

Hockenson started that play in the backfield. Iowa also split him out in a WR spot often.

As the PFF stats say, Hockenson proved adept at working down the field …

Here’s Hockenson extending to reel in a TD, and then even getting both feet in to make sure it would count in the pros …

And if you don’t bring him down after he makes a catch in the middle of the field, he’s got the speed and balance to make you pay.

The last piece here is the blocking. The past few years have given us players such as Evan Engram and Mike Gesicki who look like big wideouts but couldn’t block a Twitter troll. That ain’t Hockenson.

This guy who played just 2 college seasons looks at least ready to compete on that front, even if he’ll likely need to continue building up his strength -- and probably his weight. (Hockenson measured 55th percentile for the position in height but just 38th percentile in weight.)

Just like his receiving exposures, Hockenson got blocking reps -- on both run and pass plays -- from various spots in the formation. And Iowa wasn’t scared to have him seal the play side or even deliver the lead block from a FB spot.

Hockenson can do everything the position asks and fit any system. He already blocks well enough for 3-down duty, and he can work as a receiver at any level.

Is he a finished product? Of course not. But he’s a whole lot closer than many other TEs who have come out -- even predecessors who went high in Round 1.

History says we shouldn’t expect a TE to deliver big fantasy value right away, but Hockenson looks capable of even that in the right situation. At the least, he merits Round 1 consideration in dynasty rookie drafts. He ranks among this class’ top prospects across positions.