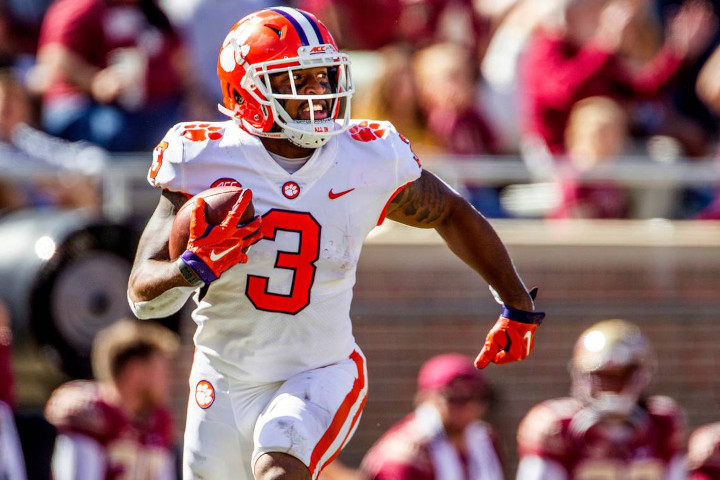 Rodgers had a decorated high school career, racking up 3,498 receiving yards and 47 TDs. He was named Tennessee’s Mr. Football as a junior and senior. Tabbed a 4-star recruit by most scouting services, Rodgers chose Clemson over offers from Alabama, LSU, USC and Florida State, among others.

He found playing time tough to come by as a true freshman for a Tigers team that featured NFLers Hunter Renfrow, Deon Cain, Ray-Ray McCloud and Tee Higgins. But Rodgers earned a starting job in 2018, ranking 2nd on the team behind Higgins in catches and 3rd behind Higgins and Justyn Ross in receiving yards and TDs. He also averaged 7.7 yards and scored once on 39 punt returns.

Rodgers’ momentum was halted by a torn ACL in his right knee suffered in March 2019. He made a remarkably fast recovery, though, returning to practice just 5 months after surgery. He missed Clemson’s season opener that year but returned for Week 2. And the next week, he ripped off an 87-yard TD as part of a 4-121-2 effort.

His final numbers were down from 2018, but it’s safe to assume that Rodgers wasn’t at 100% during his junior season.

He was this past year, when he easily set career highs across the board. With Higgins off to the NFL, Rodgers emerged as QB Trevor Lawrence’s top target, leading the team in catches, receiving yards and TDs. His market shares: 23.6% of the receptions, 24.4% of the yards and 22.6% of the TDs.

Rodgers was a steady presence, hauling in 5+ balls for 54+ yards in 10 of 12 outings. His 6.4 catches per game rank 5th in school history; his 85.0 receiving yards per game 7th. Rodgers was named first-team All-ACC and a Biletnikoff Award semifinalist.

Rodgers’ game is predicated on his after-catch ability. He plays like a RB with the ball in his hands, showing good vision, enough wiggle and strong balance to run through contact. Pro Football Focus credited him with 17 broken tackles in 2020.

Nothing else stands out on tape, though. For a smaller slot receiver (82% of his snaps last year came in the slot), Rodgers doesn’t create much separation on short and intermediate routes. He was largely a manufactured-touch guy last year, with 30 of his 77 catches coming on screens, per PFF.

Rodgers is also below average in contested situations. He has a small catch radius and doesn’t look comfortable playing in traffic.

While he didn’t do much downfield work at Clemson, it’s possible that he has more ability there than he’s shown. His 84.3 PFF receiving grade on targets 20+ yards downfield was significantly higher than his grades on targets of 1-9 yards (67.3) and 10-19 (77.0)

Rodgers brings nice after-catch ability. It doesn’t project as a dominant trait at the next level, though. And it’s fair to question how often his NFL team will be able to get the ball in his hands. He might have trouble creating separation, even from the slot. And he’s not going to win often in contested situations.

There’s been some talk of moving Rodgers to RB, which might give him a better shot to make a real impact. Interestingly, Rodgers went through some RB drills at Clemson's Pro Day. As a WR, he looks no better than a team’s #3 WR -- and a low-upside fantasy asset.