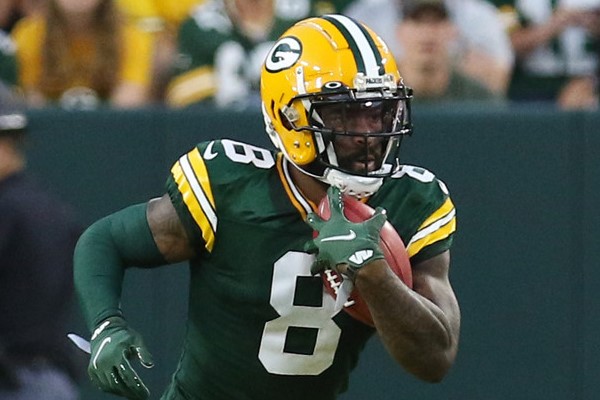 Packers beat writer Matt Schneidman writes that the “NFL stage was far too big” for rookie WR Amari Rodgers. That certainly shows in his production. A 3rd-round pick, Rodgers totaled only 4 catches in 16 games while handling 31 returns. Schneidman doesn’t believe Rodgers will have a “substantial role” in 2022 unless this WR corps undergoes a major overhaul. Prior to the quiet year 1, Rodgers exited Clemson on the shorter side (5’10) and never profiled as a downfield threat. He’s not a recommended pick in early best ball drafts.

Packers WRs Davante Adams and Allen Lazard were not activated from the COVID list ahead of the 4 pm ET deadline and are out for tonight's game vs. the Cardinals. WR Marquez Valdes-Scantling (hamstring) was not activated from IR and is also out. Green Bay did activate WR Malik Taylor from the COVID list and elevated WR Juwann Winfree from the practice squad. So the Packers' WRs tonight are Randall Cobb, Equaniemous St. Brown, Amari Rodgers, Taylor and Winfree.

Packers WR Allen Lazard has joined WR Davante Adams on the COVID list. Both guys are virtual locks to miss Thursday night's game vs. the Cardinals. We'll see if Green Bay loses anyone else for that one. The Packers are currently down to WRs Randall Cobb, Equanimeous St. Brown and Amari Rodgers on the active roster. WR Marquez Valdes-Scantling is eligible to come off IR. WRs Juwann Winfree and Chris Blair are on the practice squad. RB Aaron Jones and TE Robert Tonyan figure to play big roles in the passing game on Thursday night.

ESPN's Kevin Seifert expects Randall Cobb to beat out Amari Rodgers for the Packers' starting slot receiver job this season. "Aaron Rodgers' long and clear history of favoring veteran receivers should be the guiding light of this discussion," Seifert writes, noting that no Packers rookie WR has topped 68 targets in a season with Rodgers. Cobb, of course, spent his first 8 NFL seasons with Rodgers. And he remained reasonably effective with the Texans last year. He has a real shot to finish 2nd on the 2021 Packers in targets and is worth considering late in PPR drafts.

WR Randall Cobb tweeted that he's been traded to the Packers, and NFL Network's Ian Rapoport confirms that the deal will be done once Green Bay gains cap space to make room. Cobb spent his first 8 seasons with QB Aaron Rodgers and the Packers, finishing as a top 30 fantasy WR 3 times (2012, 2014 and 2015). He posted a 55-828-3 line and WR42 PPR finish with the Cowboys in 2019. Then in Houston last year, Cobb tallied 38 catches, 441 yards and 3 scores in 10 games. He finished 60th in PPR points per game. But Cobb ranked a respectable 26th in yards per target, 52nd in yards per route run and 50th in Pro Football Focus receiving grade among 99 WRs with 40+ targets. Rodgers clearly had a big say in this move -- and we'd expect him to make sure Cobb is the starting slot receiver this season. That'll leave Marquez Valdes-Scantling, Allen Lazard and rookie Amari Rodgers fighting for the last spot in 3-WR sets. In Houston, meanwhile, Cobb's departure frees up the starting slot job. Consider newly acquired WR Anthony Miller the favorite to win that.