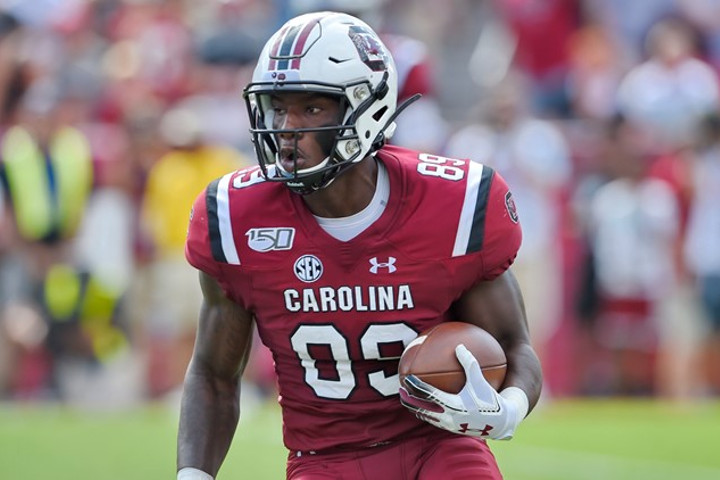 A broken foot prevented Edwards from working out at the Combine. Coronavirus concerns cancelled South Carolina’s Pro Day, so we have no athletic testing for him.

Edwards owns the earliest breakout of any WR in this year’s draft class. As a 17-year-old true freshman, he tied for the team lead in receiving scores and ranked 3rd behind NFLers Deebo Samuel and Hayden Hurst in catches and receiving yards. Edwards’ market shares: 17.7% of the catches, 21.3% of the yards and 33.3% of the TDs.

He improved his numbers across the board as a sophomore, this time leading the Gamecocks in all major receiving categories. (Injuries limited Samuel to just 3 games in 2017). Edwards accounted for 26.1% of the team's receptions, 28.4% of the receiving yards and 27.8% of the receiving TDs. He was named team MVP on offense.

Although Samuel took back over as South Carolina’s lead receiver in 2018, Edwards set new career highs in yards and TDs. His market shares dipped a bit from the previous year: 20.2% of the receptions, 23.9% of the receiving yards and 21.9% of the receiving scores. He added punt returns to his duties, averaging 7.9 yards on 12 returns.

Edwards missed the final 2 games of his senior season with a left knee injury. But he set new personal bests in catches, yards and TDs per game. In fact, he led the SEC with 7.1 catches per game and ranked 4th with 81.6 receiving yards per game.

Edwards easily paced the Gamecocks in all major receiving categories and posted monster market shares in his 10 outings: 30.5% of the receptions, 34.8% of the receiving yards and 50% of the TDs. Those marks rank 5th, 6th and 2nd among 23 of this year’s top WR prospects.

Edwards left South Carolina as the school’s all-time leader in career receptions and receiving yards. His 22 career TDs rank 3rd in school history, behind only Sidney Rice and Alshon Jeffery. Edwards also impressively recorded at least 1 catch in all 48 games in which he appeared.

Finally, it’s worth noting that Edwards has compiled a rather lengthy injury history. In addition to that 2019 knee injury, he tore the meniscus in his right knee as a high school senior, strained a hamstring as a freshman and fractured his left foot on February 21 while training for the Combine.

Edwards has an NFL-ready body. He’s thick-framed and plays with power through his routes, at the catch point and after the catch.

Let’s start with his YAC ability. Edwards isn’t gonna ‘wow’ you with his speed, but he has sneaky burst and packs a punch. He averaged 7.6 yards after the catch and forced 15 missed tackles last year, per Pro Football Focus — both top 45 marks in the country.

Edwards isn’t an elite route runner. But he has just enough quickness to create separation on short and intermediate routes. And he’s comfortable making catches in tight quarters.

He also has some of the most reliable hands in this year’s WR class. Edwards dropped just 4.0% of his catchable targets last season, per PFF, and can make off-target grabs.

Edwards probably won’t make his living on deep balls as a pro. But he did at least flash the ability to make plays downfield in college.

Edwards’ injury history is a legitimate concern. But that might just turn him into a value in both the NFL Draft and dynasty drafts.

He boasts an impressive production profile, and his tape shows everything you want to see from a big-bodied possession receiver.

When projecting Edwards to the next level, think of Michael Thomas’ role for the Saints. Edwards should be able to line up both outside and in the slot (he played 32% of his snaps in the slot last year), win on short and intermediate routes and add value with his after-catch ability.

We’ll see where Edwards lands, but he’s shaping up to be an intriguing sleeper.