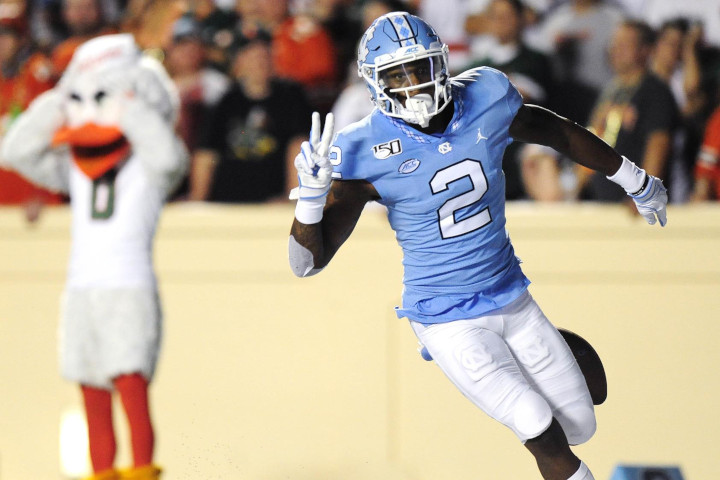 Brown was a 4-star recruit and a top 35 WR in the 2018 class coming out of West Mecklenburg High School in Charlotte. He opted for the home-state Tar Heels over more than 15 other interested schools, including big-name programs like Alabama, Ohio State, Michigan, Florida and Oklahoma.

Brown played in 10 of 11 games, making 6 starts, as a true freshman. He ranked 5th in catches and 6th in receiving yards on a team led by sophomore WR Dazz Newsome and redshirt junior WR Anthony Ratliff-Williams, who went undrafted in 2018 and is currently unsigned.

Brown set new career highs in catches and yards and led the team in all major receiving categories this past year, despite opting out of North Carolina’s bowl game to start prepping for the draft. His market shares in his 11 games: 24.3% of the catches, 32.5% of the yards and 28.6% of the TDs.

Brown was again a big-play machine, posting a 20.0 yards-per-catch average that led all players with 40+ grabs. He was named First Team All-ACC, a Third Team All-American and a Biletnikoff Award semifinalist.

Brown doesn’t have elite speed or acceleration. He’s not a high-level route runner. And he was below-average in contested opportunities last year, converting just 36% according to Pro Football Focus.

But the guy just finds ways to make plays downfield. Like this ridiculous catch, ripping the ball away from the CB as he falls to the ground:

Brown ranked top 5 in the nation in both deep catches (12) and yards (543) last year. He’s certainly fast enough. And he displays nice quicks off the snap to create instant separation:

But his best attribute is his ball-tracking ability.

(This next play is out of bounds but is an impressive display of concentration and hands.)

Brown wasn’t as effective on short and intermediate routes as he was downfield at UNC. He earned an elite 94.4 Pro Football Focus receiving grade on targets of 20+ yards last year. But that sunk to 86.9 from 10-19 yards and 67.1 from 1-9 yards.

Brown has some work to do on the route tree -- but I did see some flashes that make me optimistic about his potential.

Brown wasn’t a big YAC guy in college, largely because he ran so many downfield routes. But he did show a decent combination of speed, agility and power. He’s not a zero in this department.

Brown should be ready to contribute immediately as a deep threat in the NFL. And I think he has the potential to develop his route-running chops and become a more complete receiver.

We’re probably not looking at a #1 WR or volume hog at the next level. But Brown’s college production, athleticism (84th percentile Relative Athletic Score) and tape have him looking like a safe bet to be a solid contributor. Think something on the John Brown - Nelson Agholor spectrum.