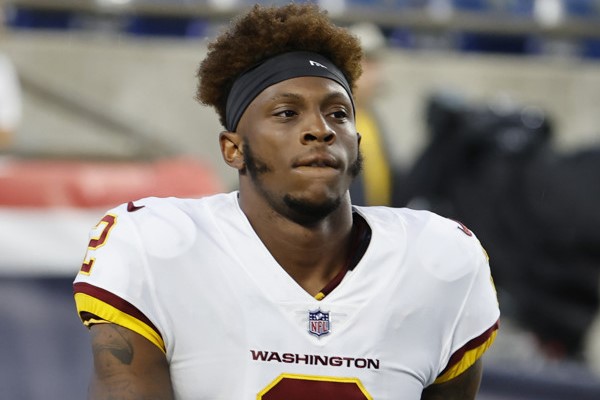 It would probably take an injury to Terry McLaurin or Curtis Samuel for Brown to have a shot at true fantasy relevance this year. His best hope is a camp good enough to make him a top 3 wideout in an offense that doesn’t look like it’ll be able to afford 3 regularly

Brown out with knee injury

Washington WR Dyami Brown was knocked out of Sunday's game in Atlanta with a knee injury. With WR Curtis Samuel back, Brown was off the redraft radar anyway.

Washington selected North Carolina WR Dyami Brown with the 82nd pick of the 2021 NFL Draft. After a quiet freshman season, Brown topped 1,000 yards in each of the past 2 years, totaling 20 TDs and averaging a huge 20.1 yards per catch. He has good-not-great speed (4.45-second 40 time) but explodes off the snap and is a strong ball tracker. Brown ranked top 5 in the nation in both deep catches (12) and yards (543) last year, according to Pro Football Focus. The 6’1, 189-pounder has some work to do in the short and intermediate games -- but he does flash the potential to develop as a route runner. He earned an 84th percentile Relative Athletic Score and is only 21 years old. Brown has a real chance to win a top 3 role in Washington this season alongside Terry McLaurin and Curtis Samuel.