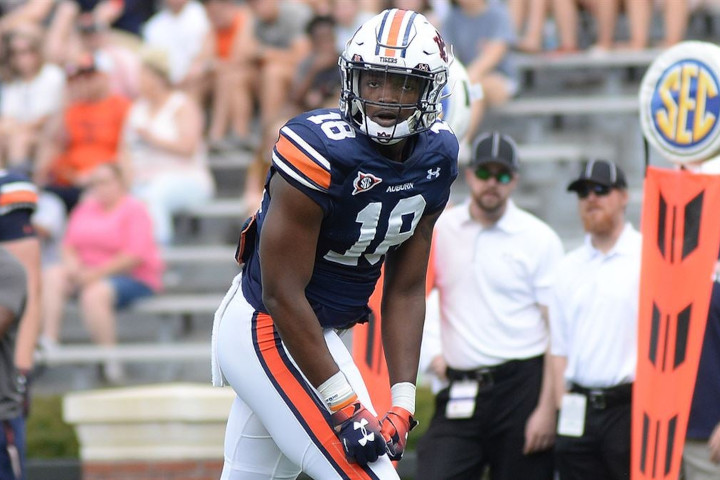 Williams played WR and safety at Bryant High School in Alabama and was also a track and field standout, earning medals in the long and high jumps. The 4-star prospect was heavily recruited, garnering offers from Alabama, Georgia, Florida and Florida State, among at least 7 others.

Williams emerged as Auburn’s top target as a sophomore in 2019, easily leading the team in all major receiving categories despite missing 1 game with a shoulder injury. He posted strong market shares in his 12 outings: 27.3% of the catches, 32.8% of the yards and 42.1% of the TDs. Williams was named Third-Team All-SEC.

He took a step back this past year, though Williams led Auburn again in receiving yards and TDs but finished behind fellow 2021 WR prospect Anthony Schwartz in catches (54). Williams’ market shares also declined to 21.8% of the catches, 31.5% of the yards and 33.3% of the scores.

Williams is frustratingly inconsistent on tape. He doesn’t lack for highlight-reel plays.

He’s a weapon in the open field, with more make-you-miss skills than you might expect from a man of his size.

There are even flashes of NFL-level releases and routes.

So why, then, did Williams catch just 47% of his targets last season? Shoddy QB play was partly to blame. Bo Nix completed only 59.9% of his passes and averaged 6.8 yards per attempt in 2020. Pro Football Focus notes that Williams had “one of the lowest catchable pass rates in the country.”

But there are plenty of holes in Williams’ game, too. He can struggle with physical coverage and is too easily bodied off routes.

Those contested-catch skills that we saw above come and go. Per PFF, Williams hauled in only 9 of 30 contested chances this past season. That’s not good enough for a guy who will need to win that way in the pros.

Williams’ hands are also unreliable. He dropped 16 of 148 catchable targets for his career, according to PFF -- a subpar 10.8% drop rate.

It’d be easy to fall in love with Williams’ upside. He’s big and athletic. And his YouTube highlights package is impressive.

But he has a ways to go before hitting that ceiling as a pro. His hands, route running and contested-catch skills are simply too inconsistent from snap to snap. And it’s worrisome that his production took a step backward from 2019 to 2020.

It’s within the realm of possibility that Williams develops into 1 of the 4 or 5 best WRs in this class. And that type of ceiling is what we should be looking for in the later rounds of dynasty rookie drafts. But Williams’ floor is too low to consider him anywhere near the top of this talented and deep group of incoming rookie wideouts.