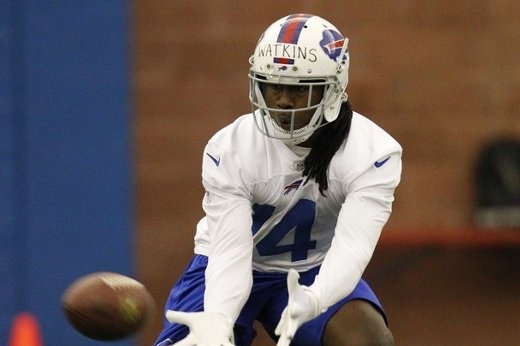 We’ve got our Dynasty Rookie Rankings. Now it’s time to put them to use.

We were recently invited to participate in DynastyNerds.com’s Post-Draft Dynasty Rookie Mock Draft. It was a 12-team, 6-round draft with standard starting lineups and PPR scoring.

Evidently, we won this fake league last year because we were strapped with the #12 pick. Since we don’t have a roster, all of our picks were made based on best player available. Don’t expect to see any surprise moves – we stuck to our board.

But it’s always interesting to see how the rest of the pack is valuing the new guys. Here’s a look at all 6 rounds of the draft, including our thoughts on some of the bigger steals and reaches.

No surprise at the top. Anyone passing on Watkins or Evans with a top-2 pick is getting too cute.

Matthews landed in an ideal spot with the Eagles. Unfortunately, that means he’s no longer flying under the radar like he was in the pre-draft process. If you’re sitting in the back half of the 1 st round and want to get your hands on Matthews, start working on trading up.

Sankey and Hyde figure to be the only 1 st-round RBs in most rookie drafts. Sankey is an ideal fit for a dynasty team in “win now” mode. Hyde might be the better fantasy bet by 2015, though.

Manziel will need to be a perennial top 8 fantasy QB to be worth the 1.07. He has that type of upside, but concerns about his size and durability make him a risky Round 1 investment.

There might be doubts about his ultimate upside, but Beckham seems like a steal at 1.10 considering he was the 12 th guy off the board in the NFL Draft. He’s a safe bet to deliver fair value as a late 1 st-rounder.

Surprising to see Benjamin last until 1.12. Sure, the bust potential is high. But it is for most of these rookies. And Benjamin has an enticing combination of short- and long-term upside.

Lee goes 3 picks after teammate Allen Robinson, despite being selected 22 picks earlier in the NFL Draft. The durability concerns are legit, but if Lee can regain 2012 form he’ll be a steal in the 2 nd round.

We start to get into more long-term investments in this round. Latimer, Carey and Moncrief would all need an injury ahead of them on the depth chart to make a 2014 fantasy impact. But all 3 have plenty of upside in 2015 and beyond.

The rest of the dynasty crowd seems to be much higher on West than we are. He put up huge college numbers and is joining a Browns backfield led by injury-prone and unproven Ben Tate. But West is making a huge jump in competition after playing his college ball at Towson. And he’ll need to fend off fellow rookie Isaiah Crowell, who might be more talented.

The “2 nd tier” of TEs and Bridgewater come off the board in the 2 nd. Amaro and Seferian-Jenkins are fine picks there if your team needs TE help. Bridgewater, as much as we like him in real life, doesn’t have enough upside to be worth a pick this high.

Johnson surprisingly dropped to the 7 th round of the NFL draft, but that hasn’t hurt his dynasty stock. And it shouldn’t. Johnson has the size and ability to develop into a 3-down back, and only Toby Gerhart stands between him and a starting job.

I was hoping to land Freeman at 2.12 but settled for Hill. The Bengal might have more 2014 fantasy upside than the Falcon. But Hill will struggle to win a lead role in Cincinnati as long as Gio Bernard is around. Freeman has a much better shot to enter the starting lineup within the next couple seasons.

Crowell is the 1 st undrafted player off the board. And rightfully so. Strip away the character issues and he might be the best RB in this class. Crowell is capable of earning a significant role in Cleveland’s backfield this year.

Anthony is the biggest reach of the round and maybe of the entire draft. He’s undersized and not particularly fast. His upside is Dexter McCluster.

Evidently, I’m not the only one on the Jeff Janis bandwagon. The Saginaw Valley St. product goes 6’3, 219 pounds with 4.4 speed. He’s a project for the Packers but could develop into a starter 2-3 years down the road.

You’ve no doubt heard about Seastrunk’s struggles as a pass catcher and blocker. But those are skills that can be developed. He’s an explosive runner. And that’s something you can’t teach.

Round 4 kicked off with a couple lesser-known but intriguing RBs.

Grice is one of the better pass-catching backs in the draft class. He could assume that role for the Chargers in 2015, when Danny Woodhead hits free agency.

Williams got kicked off his Oklahoma team last year and went undrafted. But he’s a 5’11, 222-pounder with 4.4 speed. And he joins a less-than-settled Dolphins backfield.

Like De’Anthony Thomas, Archer is woefully undersized. At least he has elite speed, though. If you’re looking to get into the pint-sized RB market, go Archer over Thomas.

Garoppolo and Thomas are both real-life projects and long-term dynasty investments. But Thomas has tons more upside thanks to a rocket arm and supreme athleticism. Always aim for upside in the later rounds of rookie drafts.

Three QB fliers in the 5 th round. Mettenberger is our favorite of the bunch thanks to his skill set and landing spot. He has a big arm and played in a pro-style offense at LSU. And he gets to work with HC Ken Whisenhunt in Tennessee, with only Jake Locker standing between him and a starting job.

Taliaferro wasn’t on many dynasty leaguers’ boards prior to the draft. But he is now. This is a 6’0, 229-pounder that works best in a zone scheme, which is exactly what Baltimore will run under OC Gary Kubiak. Ray Rice appears to be on the decline, and Bernard Pierce remains a question mark.

Highlight Devin Street’s name as a deep sleeper in dynasty. He combines a 6’3, 198-pound frame with 4.5 speed and a 37-inch vertical. Street averaged 16.7 yards per catch at Pitt last year and is a nice fit in Cowboys OC Scott Linehan’s vertical passing attack. The rookie could emerge as Dallas’ #3 WR this season.

Coleman went undrafted but couldn’t have landed in a much better spot. The gigantic 6’6, 225-pounder could eventually take over Marques Colston’s role for the Saints.

A pair of intriguing undrafted TEs in Round 6.

Burton looks more like a WR at 6’2 and 224 pounds. He played a similar role as Aaron Hernandez at Florida. It’ll be interesting to see how the innovative Chip Kelly deploys Burton.

Leonard led all TEs at the Combine with a 4.50-second 40 time. The 6’2, 252-pounder was booted from Florida for off-field issues and then racked up 85 catches, 1,174 yards and 11 TDs in 2 seasons at Tennessee State. Leonard has major pass-catching upside and landed in OC Norv Turner’s TE-friendly offense.

Gaffney turned heads at the Combine by running a 4.49-second 40-yard dash at 5’11 and 220 pounds. He doesn’t play that fast, but he runs hard and is reliable in the passing game. Gaffney joins a crowded Carolina backfield, but we know the Panthers want to pound the ball on the ground.

Jones is a smooth 6’0, 188-pounder with sub-4.5 speed. He looks like an NFL-ready WR thanks to his sticky hands and crisp routes. Jones could quickly emerge as the #3 WR for the pass-happy Lions.