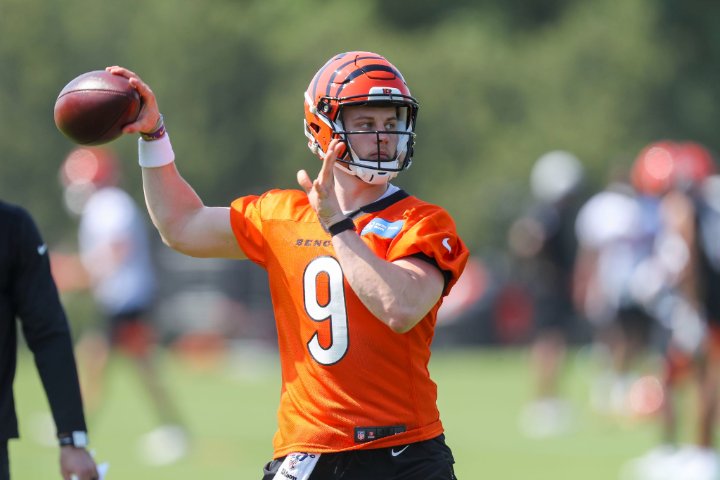 Joe Burrow looks set for full participation from the start of training camp.

So if his left knee is back to 100% coming off the ACL and MCL tears that ended his rookie campaign in November, then we should all be pretty excited to see what last year’s top pick has to offer this season … right? Especially now that he’s added former college teammate Ja’Marr Chase to Tyler Boyd and 2019 breakthrough Tee Higgins.

There’s no denying the upside to Burrow, whether you’re talking real life or fantasy. But the recent history of QBs with ACL tears just might give us reason for pause.

We have seen 13 other seasons of ACL tears to starting QBs since 2005. That group, on whole, has lost fantasy ground in returning from the injury. Here’s the list, with: 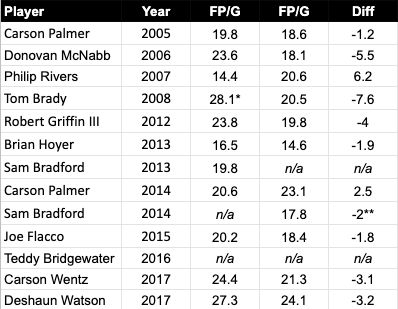 A few notes before we dig into the info …

* Tom Brady suffered his injury in the season opener. So his initial points per game come from 2007.

** Sam Bradford sustained ACL tears during the 2013 season and then before the 2014 season. So the table includes “n/a” for the initial follow-up season and then for the 2014 baseline points per game. The minus-2 difference for his 2nd injury compares his 2015 comeback season to his 2013 pre-injury numbers.

As you can see, almost every QB in the sample group saw his points per game decline post injury. The median for the group was a loss of 2 fantasy points per game.

Median is important here, so that we’re not swayed too far in either direction by outlier numbers. (Losses of 5+ points for Donovan McNabb and Tom Brady, for example, or Philip Rivers’ 6.2-point gain.)

But where did the losses come from?

The biggest culprit in the numbers I looked at: passing TDs. 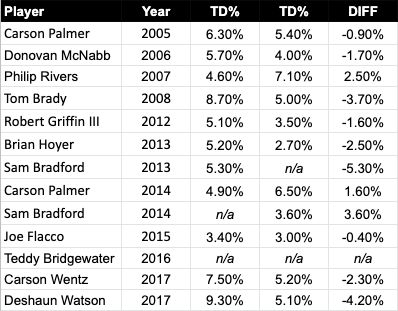 The median change in TD rate for the 13 QB seasons here was a dip of 1.6 percentage points in TD rate.

There has definitely been some bad luck at play. You can see in the table the extraordinary pre-injury TD rates for Tom Brady, Carson Wentz and Deshaun Watson driving up that side. The post-injury column, though, also features career-high rates for Philip Rivers and Carson Palmer.

It’s also worth noting that the medians for the 2 TD rate columns come out to 5.3% and 5.0% -- a smaller change for the group on whole.

Another key difference after the injury came on the rushing side. The QB group features mostly classic pocket passers, but the more mobile players from the sample all saw rushing downturns post injury.

McNabb bumped up his carries per game from 3.2 to 3.6, but he averaged nearly 2 yards less per rush and 4.3 less per game. He also didn’t find the end zone at all, after averaging 3 rushing TDs per year over his first 8 years.

Griffin plummeted from a tremendous rookie-year rushing line -- 120-815-7, 6.8 per rush -- to numbers that would be good for most QBs: 86-489-0. The loss of all rushing scores were obviously a killer. He also lost 16.7 yards per game on the ground, though. That’s another 1.67 points per contest in most fantasy formats.

Wentz -- who missed the 1st 2 games of the following season -- saw his rushing fall way off. He scored no running TDs either year, but he averaged 1.8 fewer attempts and 2.0 fewer yards per rush post injury. That knocked him down from 23.0 yards per game to a career-low 8.5.

Watson fared the best, losing 1.9 yards per carry off his average but increasing his attempts per game (from 5.1 to 6.2) and keeping his rushing-TD rate nearly the same.

Burrow isn’t a big runner but did score 3 times on the ground last year and was on pace for a top-10 finish among QBs in carries.

When I first looked at the table of post-injury QBs, I just saw another reason to be pessimistic for Joe Burrow’s return season. But looking at how those QBs finished that way has changed my mind a bit.

It’s certainly not good that the sampling of injuries produced a median downturn in fantasy scoring. But the group also leaves me no reason to expect Burrow to decline in completion rate or yards per attempt. Factor in that Burrow ranked only 25th in yards per attempt as a rookie, and there might be more reason to believe he’ll improve.

The fact that passing TDs and rushing TDs have accounted for the largest downturns helps as well. We already know that touchdowns are tougher to predict than opportunities and yards. Burrow, specifically, is coming off a poor passing-TD rate. His 3.2% checked in just 28th league wide in 2020 among qualifiers. League average in that category was 4.77%.

Losing the rushing TDs off his numbers from last year would certainly hurt. But Burrow was averaging just 14.2 rushing yards per game last year. Cutting that in half while improving his passing-TD rate wouldn't hurt his fantasy scoring overall. And projecting Burrow to go from 3 ground TDs to 0 doesn't make much sense. That particular category should come down to luck more than the health of his left knee.

We’ll certainly be tracking reports on Burrow’s knee -- and general performance -- throughout the rest of the summer. And I remain uninterested in Burrow as a top-10 fantasy pick among QBs.

But a QB13 ADP that puts him right next to Trevor Lawrence in current FFPC best-ball drafting now seems more appropriate than it did before.

Check out Burrow's player profile and Jared's "Finding This Year's League-Winning QB" for more on the Cincinnati Bengals QB.