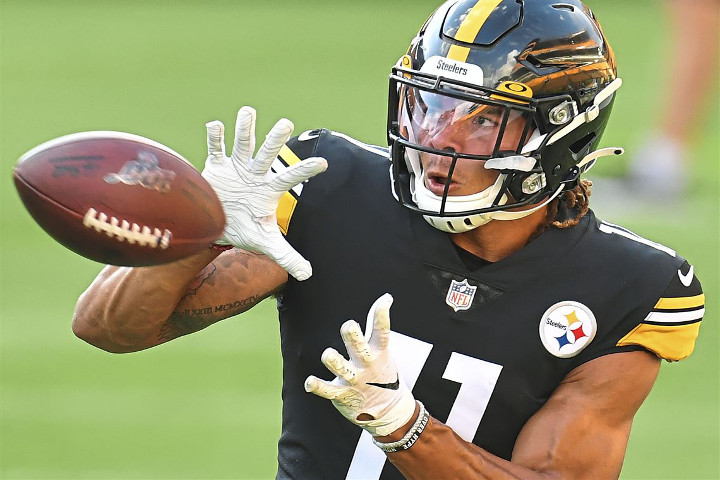 - Claypool earned the trust of Ben Roethlisberger and the coaching staff as a rookie. He led all Pittsburgh pass catchers with 9 targets inside the 10-yard line. He even saw 3 goal line attempts on jet motions, scoring twice.

- The rookie was volatile, though. He finished as a WR1 3 times and outside the top-50 6 times.

- An average depth of target at nearly 14 yards showed his value as a downfield threat. He ranked 11th among WRs in air yards.

- Pittsburgh’s selection of Najee Harris in Round 1 says they want to commit to a more balanced approach under 1st-year OC Matt Canada. Last year, Roethlisberger ranked 3rd in pass attempts, while the team ranked 2nd in pass rate.

- Pittsburgh trotted out 3+ WRs on 80% of its 2020 plays. Adding Penn State TE Pat Freiermuth in Round 2 might force that number to come down a bit.

Claypool shattered expectations as a 2020 rookie. Filling a deep role for a Pittsburgh, the Notre Dame product brought back shades of Martavis Bryant. Claypool took 14 of his 62 catches for 20+ yards. He even punched in a pair of goal line rushing TDs.

The arrival of Najee Harris might limit those chances — and Claypool’s overall target potential.

That reality — plus the return of Johnson and Smith-Schuster — make it tough to project a major year 2 leap for Claypool. Still, if Ben Roethlisberger can stay healthy, the 2nd-year pro figures to stick as a WR3 with several more week-winning lines.