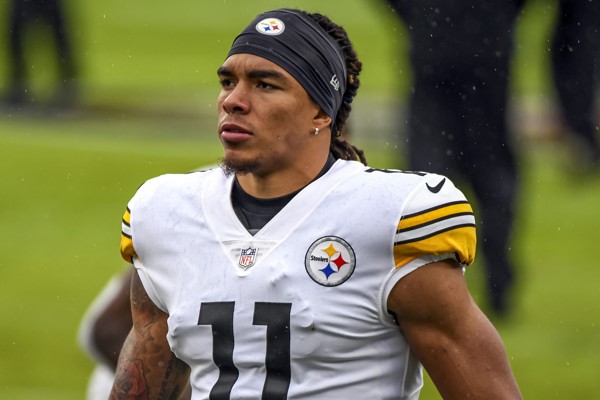 Week 14
The story after Thursday night’s loss to Minnesota was Claypool’s gaffes. He wasted a few seconds celebrating a 1st-down catch with less than a minute left, likely costing Pittsburgh 1 more shot at the end zone in an 8-point game. Earlier, he was flagged for a 15-yard unnecessary roughness penalty.

Claypool was just fine for fantasy owners, though, catching 8 of 9 targets for a team-high 93 yards. He’s now tallied 8+ targets and 82+ yards in 3 of his last 4 games.

The risk here is that Claypool’s snaps have been dialed back the past 2 weeks, likely because of those mental errors. But he’s still getting the volume because he’s clearly 1 of the Steelers’ best offensive weapons.

Consider Claypool a risk/reward WR3 over the next 3 weeks vs. the Titans, Chiefs and Browns.
Week 13
Just when it seemed like Chase Claypool was trending in the right direction, he had one of his worst games of the season. He saw a season low 3 targets, catching just 2 for 52 yards. He also gained 2 yards on his only carry. Prior to this game, 5 targets was the fewest he had seen. Some of this poor performance can be explained away as Claypool has been dealing with turf toe over the past month. In this contest his snap share dropped to 63% after seeing over 90% in each of the prior 2 games. Going forward, it will be interesting to see how the Steelers deploy Claypool. Clearly he is the 2nd option at best and potentially lower in weeks they lean on the ground game or Pat Friermuth gets involved. If Claypool can approach the 90% or more snap share and get back to the volume he had seen, including 17 targets in the last 2 games he should be able to produce. There is a ton of risk with him so tread lightly in the fantasy playoffs
Week 12
Claypool earned Pro Football Focus’ top receiving grade for Week 12. He was targeted several times deep down field, leading to an aDOT of nearly 32(!) yards. While Ben Roethlisberger stunk on the day, he took advantage of extra pass volume (8 targets). That translated to a 3-82 line. Claypool remains stuck on 1 TD this year (Week 5), but he’s now posted 175 yards over the past 2 weeks. He remains a high-upside WR2/3 for the road ahead.
Week 11
Claypool missed last week with a toe injury but did not seem to be hampered by it on Sunday Night Football against the Steelers. He burned Asante Samuel, Jr. for a 37-yard reception that would have been a TD, but the ball was underthrown by Roethlisberger. Claypool finished 2nd on the Steelers in catches, targets, and receiving yards on the night. He finished the night with 5 catches on 9 targets (20.4% target share) for 93 yards. This was Claypool’s highest yardage output since week 5 and the 2nd most targets he has seen on the season. He is ranked as our WR27 this week against the Bengals. The Bengals secondary just held the Raiders WRs to 50 receiving yards but has given up TDs to opposing WRs in 3 of their last 4 games. The next three games on the schedule for the Steelers are @CIN, BAL, and @MIN.
Week 9
Aside from a 26-yard reception on a pass that was underthrown, it was a very quiet day for Claypool. On the long reception, he did a solid job breaking back to the football to secure the reception. Otherwise, the Bears did a good job jamming the WRs near the line and often taking away the quick reads that Ben Roethlisbeger typically relies on. Although Claypool had a target in the red zone, it was Pat Freiermuth who caught both TD passes for the Steelers.

It’s fair to wonder if Claypool has upside as the grind of the season potentially takes a toll on his aging QB. Although he’s had 2 strong games this season, 1 came when Diontae Johnson was out with an injury, and the other came when JuJu Smith-Schuster left a game early. In both of those games, Claypool moved into the injured teammate’s role and thrived. But even though Smith-Schuster is done for the year, Claypool is often being used as a downfield option for a QB who no longer has the arm strength to consistently connect with his best deep threat.
Week 6
In his first stint as the WR2 for the Steelers, Claypool let us down only catching 2-17 on 6 targets. Beyond the production the arrow is point up for Claypool. Claypool ran as the clear #2 seeing 35 routes to 38 for Diontae Johnson. Claypool was featured in the slot more seeing 28% of his routes from the slot vs. only 15% prior to the Juju Smith-Schuster injury. The production will eventually catchup up with this usage. This makes Claypool an interesting buy low heading into the Steelers bye week.
Week 5
Claypool returned from sitting out Week 4 with a hamstring injury to play a season-low 55% of the snaps in the win over Denver. His 6 targets led the team, though, and Claypool caught 5 for a game-high 130 yards. That included an 18-yard 3rd-quarter TD to give the team an 18-point lead.

We’d expect the playing time to rebound as Claypool gets further removed from the injury -- especially with most games likely to be closer. JuJu Smith-Schuster’s shoulder injury can only help Claypool’s playing time and target share.
Week 3
With Diontae Johnson missing this game and JuJu Smith-Schuster leaving the contest early with injured ribs, Claypool saw 15 targets. Unfortunately, for one of the better deep threats in the league, Ben Roethlisberger was only concerned with getting rid of the ball quickly despite the Steelers falling far behind on the scoreboard. As a result, he had a Diontae Johnson type game with less than 11 yards per catch, as defenders were onto compressing the field with the knowledge the QB was unable to test them downfield. That said, the role he was forced into resulted in his best fantasy performance of the young season.

Although it worked out that Claypool was productive when forced to step into the possession receiver role that Johnson and Smith-Schuster occupy when healthy, when they’re on the field, Claypool will have to go back to being an outside WR who runs downfield routes. Despite that being what he’s best at, Roethlisberger simply cannot make those downfield throws to unlock him, so it’s unlikely he’ll have many big games.
Week 1
Claypool rank 29 routes against Buffalo, tying him with Diontae Johnson and ranking 2nd behind JuJu Smith-Schuster (35). The results weren’t great, as Claypool caught 3 of 5 targets for 45 yards. Johnson had the lone TD on a goal line target. Claypool, however, showed his downfield ability by skying to make a catch over Tre White. Ben Roethlisberger, who was inaccurate and looked slow to process -- will need to improve for Claypool to hold up as a weekly WR2. Heading home for Week 2 (vs. Vegas), we’re optimistic that’ll happen.

Claypool shattered expectations as a 2020 rookie. Filling a deep role for a Pittsburgh, the Notre Dame product brought back shades of Martavis Bryant. Claypool took 14 of his 62 catches for 20+ yards. He even punched in a pair of goal line rushing TDs.

The arrival of Najee Harris might limit those chances — and Claypool’s overall target potential.

That reality — plus the return of Johnson and Smith-Schuster — make it tough to project a major year 2 leap for Claypool. Still, if Ben Roethlisberger can stay healthy, the 2nd-year pro figures to stick as a WR3 with several more week-winning lines.

Steelers WR Chase Claypool (toe) is not listed on the final injury report after putting in a full practice on Friday. That suggests that he’ll be at least close to 100% for Sunday night’s game vs. the Chargers. Los Angeles ranks 2nd in adjusted fantasy points allowed to WRs, and Claypool might be catching passes from QB Mason Rudolph. It leaves him as just a WR3 for Week 11.

Steelers WR Chase Claypool (toe) was limited on Thursday for the 2nd straight practice. It remains unclear whether he'll be ready for return for Sunday night's game vs. the Chargers. Check back tomorrow for another update.

Steelers WR Chase Claypool (toe) got in a limited practice on Wednesday. It's a surprise after reports suggested that Claypool was in for a multi-week absence. He now seems to have a chance to play vs. the Chargers on Sunday night. We'll get another update on his progress tomorrow.

Steelers WR Chase Claypool is considered "week-to-week" with a toe injury, according to NFL Network's Ian Rapoport. We'll look for a more concrete timeline for Claypool's return, but we can safely assume that he'll miss Sunday's game vs. the Lions. With WR JuJu Smith-Schuster on IR, we'll likely see James Washington join Diontae Johnson in 2-WR sets, with Ray-Ray McCloud the #3 WR. Johnson should continue to dominate targets. TE Pat Freiermuth could see more volume, too.

Steelers WR Chase Claypool (hamstring) isn’t listed on the final injury report. He practiced all week, including a full workout on Friday, so he should be ready for his usual role. But QB Ben Roethlisberger’s struggles leave Claypool as just a WR3 in fantasy lineups. WR James Washington (groin) is out for Week 5.