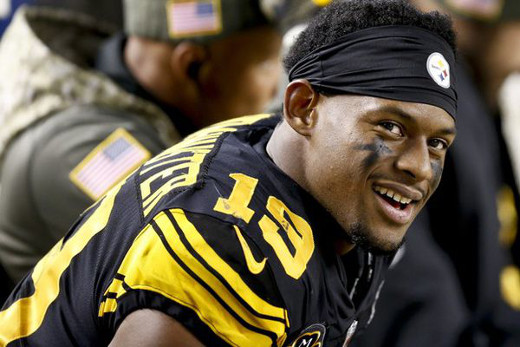 -That was enough for him to finish as the WR16, although he finished as a top-12 WR only 3 times.

-JuJu’s average depth of target stood at just 6 yards for a conservative pass offense under Ben Roethlisberger. That was the lowest figure among 84 WRs with 50+ targets.

-That explains JuJu’s healthy 77% catch rate. He played from the slot on a career-high 85.3% of his pass snaps, a theme that should repeat.

-In 2021, the Steelers return Diontae Johnson, Chase Claypool and Eric Ebron. Pat Freiermuth arrived as a Round 2 pick and should carve out a small role right away.

-Most importantly, Pittsburgh’s Round 1 selection of Najee Harris says they want to commit to a balanced approach under new OC Matt Canada.

-Roethlisberger, 39, brings 4 years worth of chemistry alongside Smith-Schuster — but also durability risk. He missed all but 2 games in 2019 before undergoing right elbow surgery.

-An unproven and potentially league-worse O-line would keep JuJu busy on quick-hitters. 15% of his targets came on screens a year ago.

The arrival of Najee Harris brings the potential to drastically bring down this unit’s pass volume. We don’t see an attractive fantasy ceiling here.

Steelers WR JuJu Smith-Schuster is resigning with the Steelers on a 1-year, $8 million deal, according to NFL Network. Smith-Schuster reportedly chose this path over similar offers from the Ravens and Chiefs that added more money via incentives. So he'll remain in Pittsburgh on a "prove it" contract for 2021. Smith-Schuster's return complicates the target picture for him, Diontae Johnson and Chase Claypool. Pittsburgh was the league's 3rd most pass-heavy team in 2020, trailing only the 1-15 Jaguars. The Steelers dumped OC Randy Fichtner and turned to QBs coach Matt Canada. We'd bet on at least a bit more balance to the play-calling in 2019. Check out our 2021 fantasy football rankings to see how the return impacts our numbers for Smith-Schuster and other Steelers pass-catchers -- as well as QB Ben Roethlisberger.

Update: ESPN's Adam Schefter adds that Smith-Schuster turned down a multi-year offer from the Eagles.

Steelers WR JuJu Smith-Schuster (knee) returned to a full practice on Friday and isn't listed on the final injury report. It looks like Thursday was just a rest day. JuJu should be ready for his usual role vs. the Browns on Sunday night.

Smith-Schuster out Thursday with knee

Steelers WR JuJu Smith-Schuster was added to the injury report on Thursday with a knee. He didn't practice. We'll get another update on his status for Sunday's game vs. the Browns tomorrow.

Steelers WR JuJu Smith-Schuster (foot) got in a limited practice on Tuesday. That gives him a shot to play vs. the Ravens on Thanksgiving night. We'll see what he does tomorrow and how he's listed on the final injury report.

Steelers WR JuJu Smith-Schuster suffered a toe injury late in Sunday's win over the Jaguars. Those can be tricky. We'll look for an update on JuJu's status.