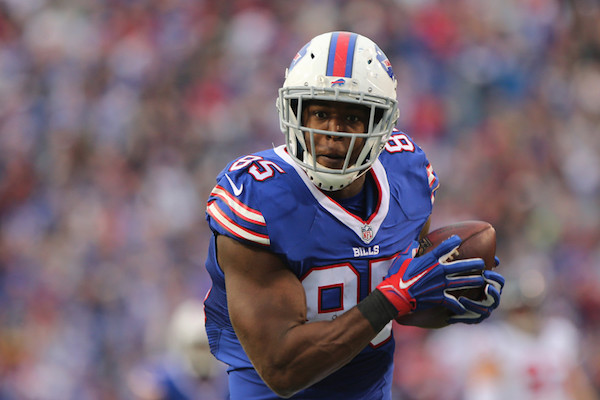 Cardinals TE Charles Clay (knee) has been activated from the PUP list. Despite missing the first couple of weeks of camp, he was listed as the starting TE on Arizona's initial depth chart. That makes him the best fantasy bet of the bunch for now, but he's not an exciting pick with the Cardinals expected to feature their WRs and RB David Johnson in the passing game.

Cardinals TE Charles Clay has been placed on the PUP list to open training camp with a knee injury. We don't have any other details on the issue, but Clay has dealt with multiple knee injuries dating back to 2012. The 30-year-old has missed 3 games in both of the past 2 seasons and at least 1 game in 5 straight. Clay's absence early in camp will give TE Ricky Seals-Jones a head start in the race for the starting job.

The Cardinals have reached a 1-year deal with former Bills TE Charles Clay. ESPN's Adam Schefter reports it's worth "up to" $3.25 million. That's decent money for a veteran joining an Arizona roster that returns TEs Ricky Seals-Jones and Jermaine Gresham. We'll see how the new coaching staff stacks this crew on the depth chart and what Clay's arrival means for RSJ's playing time. Seals-Jones carries easily the most upside among the trio but will need opportunities. This looks like a situation to avoid until late in current best-ball drafts.

The Bills released TE Charles Clay. The 30-year-old posted a career-low 8.8 YPC in 2018 and continued to battle injuries. Fortunately for Buffalo, the 2019 NFL Draft provides one of the deeper TE classes in recent memory. Consider them likely to invest in a young talent.

Bills TE Charles Clay is "week-to-week" with a hamstring injury, HC Sean McDermott said Monday. Clay hasn't been a fantasy factor all season. His absence leaves Buffalo with TEs Logan Thomas and Jason Croom, but neither is a trusty fantasy play.