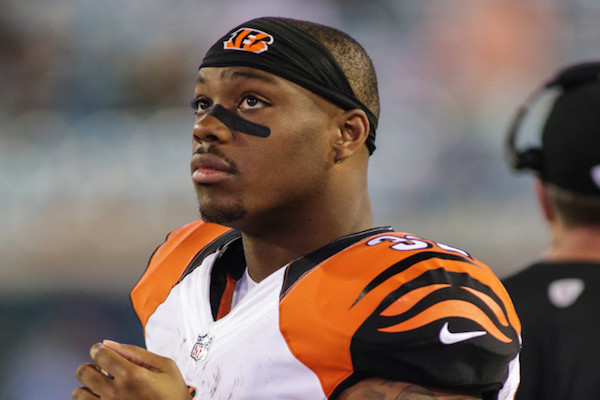 Patriots RB Jeremy Hill will miss the rest of the season after suffering a right ACL tear in Sunday's win over the Texans, according to NFL Network's Ian Rapoport. Hill left the game after handling just 4 carries and blocking a punt on special teams. His injury removes 1 competitor from a crowded fantasy football backfield. Hill turns 26 in late October.

The Athletic's Jeff Howe reports that Patriots RB Rex Burkhead has a "slight tear" in his knee. "But it’s been deemed a minor injury and something he’ll be able to play through," Howe adds. This remains a murky situation (as usual with the Patriots), and no other media members have reported on Burkhead's injury as of Friday morning. We'll continue to look for updates, but Burkhead obviously comes with plenty of risk in drafts right now. It's completely unclear what's torn in his knee, how effective he'll be playing through it and how long it'll hold up. New England, of course, is still without rookie RB Sony Michel, who had fluid drained from his knee a couple of weeks ago.

Patriots RB Sony Michel suffered a knee injury in practice Wednesday that will require a "procedure," according to Jeff Howe of The Athletic. The operation is expected to keep Michel out for the entire preseason and might cost him the beginning of the regular season. We'll keep an eye out for further details on the injury and, of course, watch his recovery.

Update: According to ESPN's Mike Reiss, the procedure drained fluid from Michel's knee. He echoed Howe's report that the recovery isn't expected to reach far into the regular season -- if it does at all.