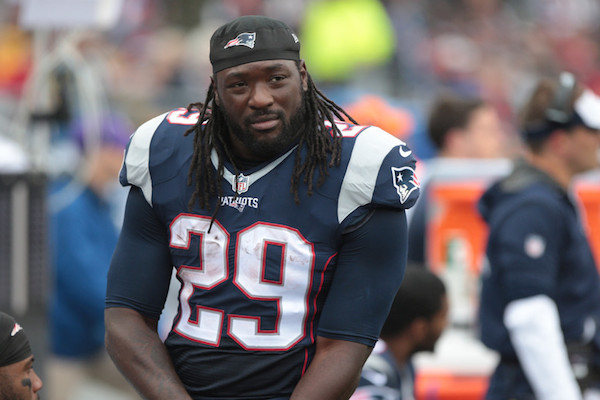 Lions RB LeGarrette Blount (calf) is active for today’s game against the Vikings. He played behind Zach Zenner last week and shouldn’t be in Week 16 fantasy lineups.

Lions RB LeGarrette Blount (calf) is questionable for this weekend’s game against the Vikings. He was added to the injury report on Thursday and limited again on Friday. Blount had already seemingly fallen behind Zach Zenner on the depth chart. His absence would be a slight boost to Zenner’s Week 16 outlook.

Lions RB LeGarrette Blount left Sunday's practice early with an undisclosed injury, according to multiple reports. We obviously can't react to this much until we get some details. Blount did, at least, head to the locker room under his own power, according to the Detroit Free Press. Any significant injury for Blount would significantly boost rookie RB Kerryon Johnson's fantasy outlook.

The Lions have agreed to a 1-year deal with RB LeGarrette Blount, NFL Network's Ian Rapoport reports. Blount will reportedly make $4.5 million, which is $2 million more than he got from the Eagles last year -- coming off an 18-TD season with the Patriots. Blount figures to join a backfield committee that retains Theo Riddick and Ameer Abdullah. With Riddick the primary pass-catcher, it's tough to find a significant role for Abdullah. Blount's OK in the Round 9 area of best-ball drafts right now.

Eagles don't plan to have a feature back

Eagles HC Doug Pederson told reporters Monday that he doesn't plan to have 1 featured RB for the season and will work out the backfield rotation by week. That's never good news for fantasy football owners, but it's not a surprise. RB Wendell Smallwood split work -- 4 carries apiece -- with LeGarrette Blount in Smallwood's lone preseason appearance. Darren Sproles didn't log a single preseason touch but obviously remains in the 2017 plans. Rookies Donnel Pumphrey and Corey Clement made the initial 53-man roster but aren't likely to garner big gameday roles early in the season. Overall, this is not a backfield to invest much fantasy capital in. Sproles and Smallwood in the later rounds of drafts are the best shots to take right now. We'll see where the situation goes.