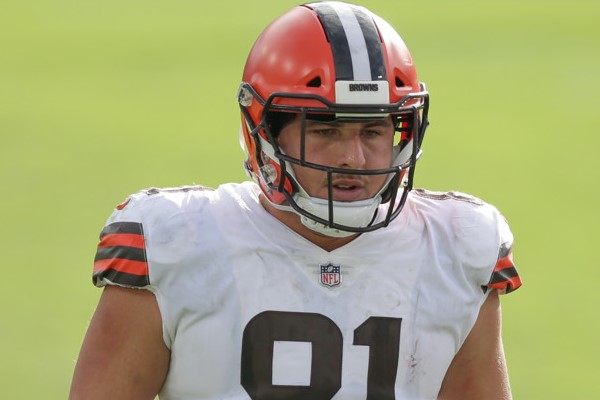 -He parlayed that success into a 4-year, $44 million contract ($23 million guaranteed) with Cleveland.

-He was a top-10 TE in each of the final 3 regular season weeks (each without OBJ). He also posted 7-46-1 on 11 targets against Pittsburgh in the Wild Card round.

-The 2021 Browns return Bryant and Njoku, plus Beckham and Jarvis Landry at WR. No significant offseason moves were made to threaten Hooper’s role.

Hooper doesn’t have the skill set that really excites us for fantasy. He also won’t slot any higher than 3rd in line for targets for the run-heavy Browns — provided Odell Beckham and Jarvis Landry stay healthy.

Even so, Hooper’s currently going deep in TE2 range and looks like a cheap source of targets. (Current projections have only 15 TEs slated for more targets.) At a minimum, he’s a matchup-based streamer.

Browns TE Austin Hooper (neck) is active for tonight's game vs. the Giants. He practiced all week, including a full workout of Friday, so the neck shouldn’t be much of an issue. Hooper has totaled just 8 catches on 11 targets over his last 4 games, though, and is just a TE2.

Browns TE Austin Hooper (neck) is listed as questionable for Sunday night's game vs. the Giants. He practiced all week, including a full workout of Friday, so expect him to play. Hooper has totaled just 8 catches on 11 targets over his last 4 games, though, and is just a TE2.

Browns TE Austin Hooper (neck) got in a limited practice on Wednesday. HC Kevin Stefanski said Hooper is "trending in right direction" to return for Sunday night's game against the Giants. He totaled just 8 catches in his last 4 games before missing last week's classic vs. Baltimore.

Hooper out vs. Ravens

Hooper not expected to play Week 14

Browns TE Austin Hooper (neck) is not expected to play vs. the Ravens on Monday night, according to NFL Network's Ian Rapoport. When Hooper missed 2 games earlier this season, TE Harrison Bryant caught 7 of 8 targets and TE David Njoku hauled in 3 of 6. Bryant is the preferred Hooper fill-in but doesn't reach TE1 status.