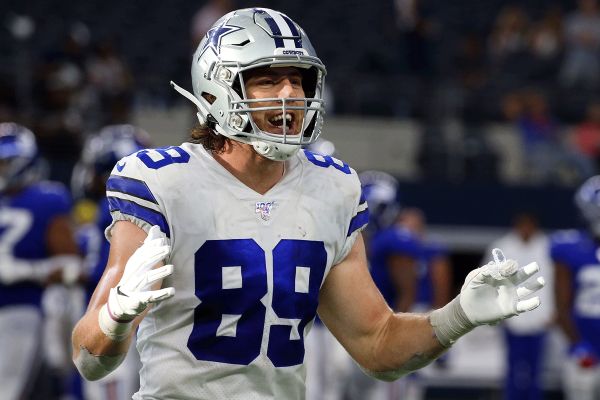 The Cowboys released TE Blake Jarwin with an injury settlement. It's not a surprising move after recent reports that Jarwin underwent major hip surgery that's expected to cost him the start of the 2022 season. We'll see if another team takes a shot on him before then, but Jarwin isn't worth a pick in early best-ball drafts.

Cowboys TE Blake Jarwin had hip surgery in late February that's "very uncommon for an active NFL player," a source tells The Athletic's Michael Gehlken. "He is not expected to be available for the start of the 2022 season, clouding his Cowboys future," Gehlken adds. Jarwin tore his ACL in September 2020. He was ready for the start of the 2021 campaign but went down with a hip injury in Week 8 that ended his season. We'll monitor his rehab this offseason, but he's not worth a pick in early best-ball drafts. Jarwin's situation probably makes it more likely that Dallas does what it has to do to bring back impending free-agent TE Dalton Schultz.

The Cowboys have placed TE Blake Jarwin on IR with his hip injury. That means he'll miss at least the next 3 games, which can only help the target outlook for TE Dalton Schultz. Sean McKeon and Jeremy Sprinkle sit behind him on the depth chart.

Jarwin out for Week 9

Cowboys TE Blake Jarwin (hip) is out for Sunday’s game vs. the Broncos. He’s averaged 2.1 targets per game on the season and just 1 per game over the last 3, so this is just a slight boost for TE Dalton Schultz.

Cowboys TE Dalton Schultz missed the team's 2nd preseason game with a "minor" ankle sprain, according to the Dallas Morning News' Michael Gehlken. "Fully expected to be ready for start of season," Gehlken adds. We'll see when Schultz is able to get back on the field, but his absence will give TE Blake Jarwin a shot to lay claim to the starting job.

Blake Jarwin, TE UNS There is no dynasty data for this player.