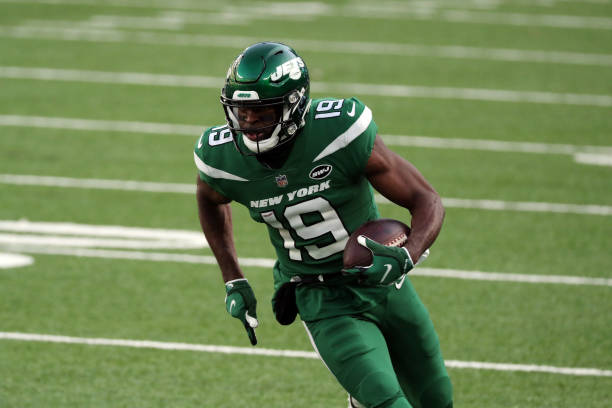 Perriman can play the deep game. But a heavy reliance on that aspect doesn’t tend to deliver regular fantasy production. He arrives in Detroit with nothing in his history to suggest he’s about to be startable in fantasy. Landing with the Lions presents target opportunity, but the team appears to prefer Tyrell Williams on the outside, and we’re not sure this offense will be able to support 2 viable fantasy wideouts. (One might be a challenge.) All told, you could make a late-draft argument for Perriman in best ball, but we see no reason to bother with him in lineup-setting redraft.

The Bears signed WR Breshad Perriman, ESPN's Adam Schefter reports. The fact that Perriman couldn't make the Lions' roster says a lot about where his game is at. So despite opportunity in Chicago behind WRs Allen Robinson and Darnell Mooney, Perriman isn't an appealing fantasy target.

The Lions have released WR Breshad Perriman. It's not a shocking move after an offseason and camp that provided only negative reports on the veteran wideout. But Detroit did guarantee $2 million on the 1-year, $2.5 million deal Perriman signed this offseason. Cutting him despite having to pay that money highlights how poor a summer Perriman has had. Tyrell Williams, Quintez Cephus and Amon-Ra St. Brown seem likely to run as the top 3 wideouts in Detroit. We'll see exactly how the group shakes out as the Lions get down to their 53-man roster by Tuesday.

Update: Lions insider Jeff Risdon tells us that WR Kalif Raymond is the favorite for the outside spot opposite Tyrell Williams. Neither Raymond nor Cephus is worth a spot on fantasy rosters.

The Lions have agreed to a 1-year, $3 million contract with WR Breshad Perriman, according to agent Drew Rosenhaus. Perriman faces clear opportunity in an offense that already lost WR Marvin Jones to the Jaguars and sure looks like it expects to lose WR Kenny Golladay. Detroit previously imported WR Tyrell Williams, signing him for more money than Perriman is getting. Holdover Quintez Cephus should compete for time as an outside receiver as well. Perriman is fine as a late-round best-ball option.

As suspected, Jets WR Breshad Perriman is in the concussion protocol. The wideout left Sunday's game after taking a shot to the head from Bills S Micah Hyde. We'll see how soon Perriman can return to the field.

Jets WR Breshad Perriman took a big hit from Bills S Micah Hyde late in Sunday's loss and appeared to be briefly unconscious. There's been no update yet from the team, but Perriman likely has a concussion. We'll update his status when we know more.