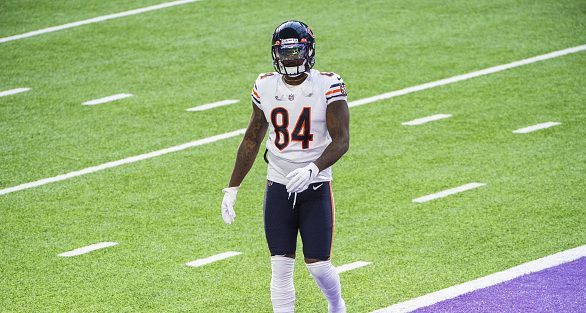 It'll be tough sledding for Patterson on the ground vs. a stout Bucs run defense. But he should be busy in the passing game. He posted a 5-58-1 line on 7 targets in the 1st meeting with Tampa.

Week 12
Patterson rushed 16 times for 108 yards and 2 TDs in the Falcons' Week 12 win over the Jaguars. He added 2 catches for 27 yards on 3 targets.
Patterson had a great game as he ripped off several long runs on his way to over 6 yards per carry.
This was an impressive game on all levels as Patterson was coming off a high-ankle sprain and went on to have his career high in rushing yards.
Patterson is the lone bright spot in the Falcons offense. He gets a tough run defense in the Bucs in Week 13, but Patterson should be plenty involved as a pass catcher.
Week 10
Patterson showed his dynamism and versatility with a 14-yard run and a 14-yard reception in the 1st quarter at Dallas. After that, an ankle injury that required re-taping on the sidelines kept him off the field. A low pass missed him 3 minutes into the 2nd quarter, and after that Patterson wasn’t involved in the offense.
Patterson’s absence left a big hole in Atlanta’s offense after he left Sunday’s game, and the impact would be even bigger if he can’t play effectively or at all Thursday against New England. NFL Media reported that Patterson could miss “a couple of weeks.” With his 5th team in 9 NFL seasons, Patterson already has career highs in rushing and passing yards and has tied his career high of 7 from his rookie season in 2013 for the Vikings. Neither RBs Mike Davis nor Wayne Gallman can come close to Patterson’s impact. With Patterson out, the only dynamic player in the Falcons’ offense is TE Kyle Pitts.
Week 9
The Swiss army knife that is Cordarrelle Patterson has truly been unlocked in Atlanta. In Week 9, Patterson delivered again for fantasy, leading the Falcons in receiving with a 6-126 line. The loss of Calvin Ridley has really opened the door for Patterson in the pass game as his role is now more secure. In the three games without Ridley this year, Patterson is 2nd on the team in targets (19) and 1st in receptions (18) and yards (223). This receiving production to go along with his 9-11 carries a week gives Patterson a solid base line even when he doesn’t score a TD.
This week the Falcons take on a struggling Dallas run D that just allowed 191 rushing yards to the Broncos in Week 9.
Week 8
Patterson has now logged 3 straight games of significantly more snap share than he saw over the 1st 4 weeks. That season-opening span saw him reach 42% just once and spend the other 3 games at 33% or less. The past 3 have found Patterson play 59%, 73% and 60% of Falcons snaps.

Unlike in Week 5 -- the London game that Calvin Ridley missed previously -- Patterson didn’t beef up on WR snaps against Carolina. He did get 13 of his 32 snaps in WR positions (8 wide, 5 slot) but also spent 18 in the backfield.

Mike Davis rebounded from a near-silent Week 7 to match Patterson’s 9 carries and edge him by 1 target (6-5), but Patterson took a short catch through 2 tackle attempts and into the end zone for Atlanta’s only TD. It’s clear the Falcons need to keep him steadily involved in an otherwise shaky offense, regardless of who else is or isn’t in the lineup.
Week 7
Patterson’s incredible run to fantasy success continued against Miami. He handled 14 of 19 team RB carries and saw all 5 targets en route to 61 total yards and a score. C-Pat was out there on Atlanta’s final drive as they looked to get into FG range — another sign that he’s their go-to guy. Earlier on his TD run, Patterson made a nice cut to follow the FB en route to 6. While his upcoming schedule isn’t great, Patterson’s dual-threat role makes him a weekly must-start.
Week 5
Patterson saw season highs in playing time, carries and targets Sunday against the Jets. He spent 59% of offensive snaps on the field, well up from his previous high of 42% in Week 3 and 33% or less in the other 3 contests. Patterson played 46 snaps in Week 5. His other 4 games all found him between 23 and 26.

That’s bound to come back down when WR Calvin Ridley returns. Patterson spent 18 snaps in WR positions vs. the Jets, compared with 7.25 per game over the previous 4 contests.

He delivered once again, though, racking up 114 scrimmage yards on 21 touches. Patterson led the team in carries with 14 and ranked 2nd in receptions with 7.

Expect Patterson to remain heavily involved in the Atlanta offense -- just not as heavily as he was in Week 5.
Week 4
Patterson was a true utility player on Sunday, used in the backfield, in the slot and out wide. (C-Pat, of course, also handled his usual return duties.) Despite playing only 23 snaps (and handling 11 touches), the former Viking recorded 3 receiving TDs. One was total blown coverage, as the Washington safety pit on a shorter route, leaving Patterson to score from 42 yards out. Sunday’s monster line continued a trend for Patterson, who’s now hit 16 PPR points in 3 straight. The bubble will pop at some point, especially if Mike Davis remains the lead ball-carrier. But C-Pat should remain useful this weekend against a banged up Jets defense.
Week 3
Patterson carried the ball 7 times for 20 yards and caught 6 balls for 82 yards in the comeback win over the Giants in Week 3. He showed off his versatility as it was evident the Falcons wanted to get the ball in his hands as often as possible. It marks the 3rd straight game with 7 carries, while Patterson now has 13 receptions on the season. Patterson has been a game breaker wherever he’s played but he has never had a role in an offense quite like this. Couple that opportunity with top-end athleticism, and it's easy to see his value continuing to grow. He's getting close to every-week FLEX status.

Week 2
Patterson rushed 7 times for 11 yards and 1 TD while adding 5 catches for 58 yards and another TD in the Falcons' Week 2 loss to the Bucs.
Patterson was able to parlay 12 touches into 69 all-purpose yards and 2 scores and is working toward flex appeal if he continues to siphon off work from starting RB Mike Davis.
Patterson should be owned in fantasy leagues of 12+ teams at this point.
Week 1
Patterson delivered several flashy plays on offense. He took his 1st carry or 10 yards, opening the 2nd drive as the lone back. Two plays later, he ran for 11 more. And then 14. Early in the 2nd quarter, he ran or 11 yards to convert a 3rd-and-9 in Atlanta territory.

Patterson also got in on some red-zone work, but he operated clearly behind Mike Davis in the Atlanta backfield. We’ll see whether he did enough in the opener to garner more work going forward.

But Davis carried 15 times to Patterson’s 7, and beat him 6-2 in targets. Davis also led in red-zone work. It’s Davis ahead of Patterson, at least for now. And we’ll see whether/how Wayne Gallman factors in for Week 2 and beyond.

Falcons RB Cordarrelle Patterson (ankle) is active for today’s game vs. the Jaguars. He was limited in practice all week and was reportedly a game-time decision coming off the high-ankle sprain. C-Patt carries elevated risk in Week 12 fantasy lineups.

Patterson a game-time decision for Week 12

Falcons RB Cordarrelle Patterson (ankle) is a "true game-time decision" for today's tilt with the Jaguars, according to NFL Network's Ian Rapoport. Patterson is "feeling much better this week," per Rapoport, but the Falcons are "making sure they are smart about it." We'll get Atlanta's inactives around 11:30 am ET.

Falcons RB Cordarrelle Patterson (ankle) is listed as questionable for Sunday's game vs. the Jaguars. He supposedly had a chance to play vs. New England last Thursday night and put in 3 limited practices this week, so we're tentatively expecting Patterson to play. We'll get Atlanta's inactives around 11:30 am ET on Sunday.

Falcons RB Cordarrelle Patterson (ankle) put in a limited practice on Wednesday. He seemingly had at least an outside chance of playing vs. the Patriots last Thursday night, so a return for this weekend's game vs. the Jaguars seems doable. We'll update Patterson's progress again tomorrow.

Falcons RB Cordarrelle Patterson (ankle) is inactive for tonight's game vs. the Patriots. It would have been surprising if he'd been able to play just 4 days after suffering what's believed to be a mild high-ankle sprain. Patterson did get in a couple of limited practices this week, so a Week 12 return seems possible. His absence tonight leaves Atlanta's backfield to Mike Davis and Wayne Gallman. We're betting on Davis leading the way in touches, but it's a murky situation (and a bad running game in general).