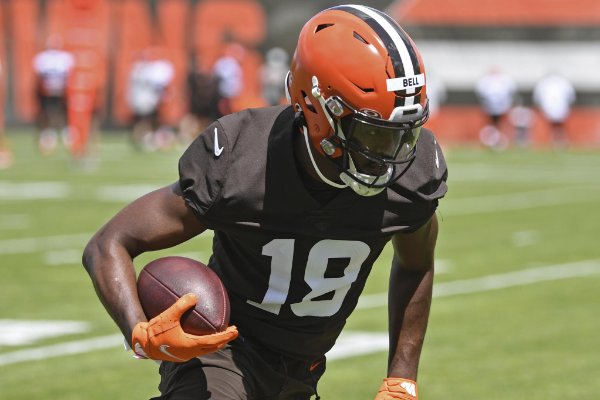 It’s tough to envision Bell becoming a big 2022 fantasy factor. It’ll take a full season of Deshaun Watson to make Cleveland a high-upside passing offense, and that seems less likely by the week. Bell faces competition with Donovan Peoples-Jones and Anthony Schwartz for the 2nd and 3rd WR spots in an offense whose top wideout ranked 53rd in total PPR points last season and 36th the year before. There’s some long-term upside to Bell for dynasty leagues, at least.

Browns WR David Bell made his training camp debut on Saturday. Previously on the PUP list, Bell was activated following a return from a foot injury. He didn’t appear in team drills, as the Browns are bringing the rookie along slowly. Per Zac Jackson of The Athletic, Cleveland “still has high hopes” for Bell.

Browns WR David Bell has been placed on the PUP list with a foot injury to open training camp. "If all goes as hoped, Bell will be back on the practice field in a couple of weeks," insider Mary Kay Cabot writes. Bell had a nice spring, drawing some 1st-team reps. But the rookie can't afford to miss much camp time if he wants a significant Week 1 role. We'll see when Bell gets back on the field.

Browns WR David Bell got some reps with the 1st-team offense in OTAs, according to The Athletic's Zac Jackson. Amari Cooper is locked in as Cleveland's #1 WR, and it sounds like Bell, Donovan Peoples-Jones and Anthony Schwartz are competing for the next 3 spots on the depth chart. Bell has drawn positive reviews so far from both coaches and beat writers. Consider him the favorite for primary slot duties this season, making the rookie an intriguing late-round pick in fantasy drafts.

Bell to play inside

According to beat writer Nate Ulrich, the Browns are “confident [WR David] Bell is capable of making an immediate impact.” Per Ulrich, the plan is for Bell to be the primary slot this season. HC Kevin Stefanski, however, thinks Bell could do more. “[Bell is] a very competitive player,” Stefanski said at rookie minicamp. “Catches the ball really well. We thought he had some savviness. When you're looking at the draft, there are so many guys who can fit, and you better have a lot of guys who can fit in your scheme. It's really what traits do you feel like you can exploit, so to speak. We thought he was really competitive at the catch and has some versatility to play outside and inside.” The 3rd-round pick has a clear path to the slot role with Jarvis Landry now in New Orelans.

The draft was a win for Bell, who got 3rd-round capital and landed with QB Deshaun Watson. His 40th percentile athleticism might cap his fantasy upside. But Bell checked every production box while at Purdue and flashed strong ball skills and crafty route-running on tape.