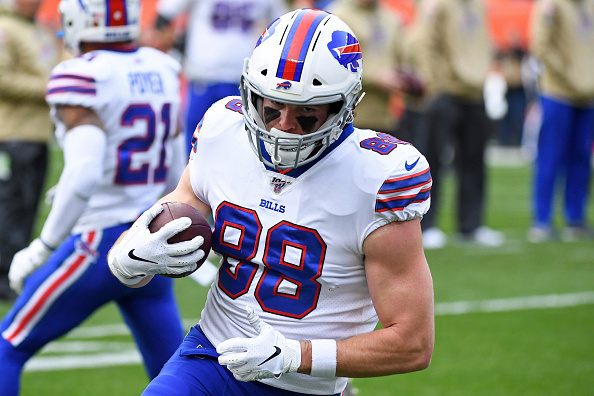 While he missed a pair of games with a broken hand — and still posted a drop rate of 9.2% — fantasy owners could forgive the young TE because of his 9 scores.

Finally, the athletic, former Round 3 pick delivered alongside 1 of the game’s best passers.

2022 turns up a contract year — and his most serious challenger for snaps/targets yet. Still, O.J. Howard comes with serious durability concerns. He might steal a few red zone TDs, but Knox remains a top-15 TE.

Bills WR Isaiah McKenzie caught 6 of 10 targets for a team-high 96 yards and Buffalo's 1st TD in Sunday's win at Detroit. That's more targets than McKenzie drew in the previous 4 games combined. WR Stefon Diggs endured an inefficient day, drawing 15 targets but catching only 8. He wound up with a solid fantasy line, thanks to a late 5-yard TD catch and a 36-yarder to set up the game-winning FG. WR Gabriel Davis added 4 receptions for 38 yards among 5 targets, while TE Dawson Knox contributed just 2 catches for 17 yards (2 targets). The next 2 weeks bring the season's 1st matchup with the Patriots and then a rematch with the Jets.

Bills WR Stefon Diggs snagged the team's only TD reception in Sunday's win over the Browns, a game that found QB Josh Allen throwing for a season-low 197 yards. Diggs totaled just 4-48 receiving on 5 targets. WR Gabriel Davis and TE Dawson Knox tied for the team lead with 7 targets apiece. Knox caught all 7 for 70 yards. Davis caught 5 for 68 yards. RB Devin Singletary was the only other Bill to catch a pass (2-11).

The NFL is moving Sunday's Bills-Browns game to Detroit, according to The Athletic's Tim Graham. Buffalo is expected to get pounded with 4+ feet of snow over the next few days. Moving from those conditions to a dome is obviously great news for all of the fantasy players in this game.

Bills TE Dawson Knox collected 4 catches for a season-high 57 yards in Sunday’s loss to the Vikings. It’s a fine outing on the surface, although Knox’s first target didn’t come until deep in the 2nd quarter. Two of his catches (and 20 yards) came in the 4th quarter with the Vikings in a major prevent defense. He entered Week 10 with just 35 yards over his past 2. Week 11 turns up a meeting with Cleveland.

ESPN's Adam Schefter calls Bills QB Josh Allen (elbow) "likely" to start today's game vs. the Vikings. That jibes with NFL Network's Ian Rapoport's Saturday report. "Bills officials spent intensive time this past week leaning on and listening to their doctors and other arm specialists, and the team was reassured that Allen is not at any added risk to make the injury worse if he plays," a source tells Schefter. We'll get Buffalo's inactives around 11:30 am ET, but Allen can be penciled into fantasy lineups for now.

Knox’s breakout 2021 included 9 TDs — 11 if you include the postseason. Only 25, he’s now set to enter a contract season alongside new Bills TE O.J. Howard.