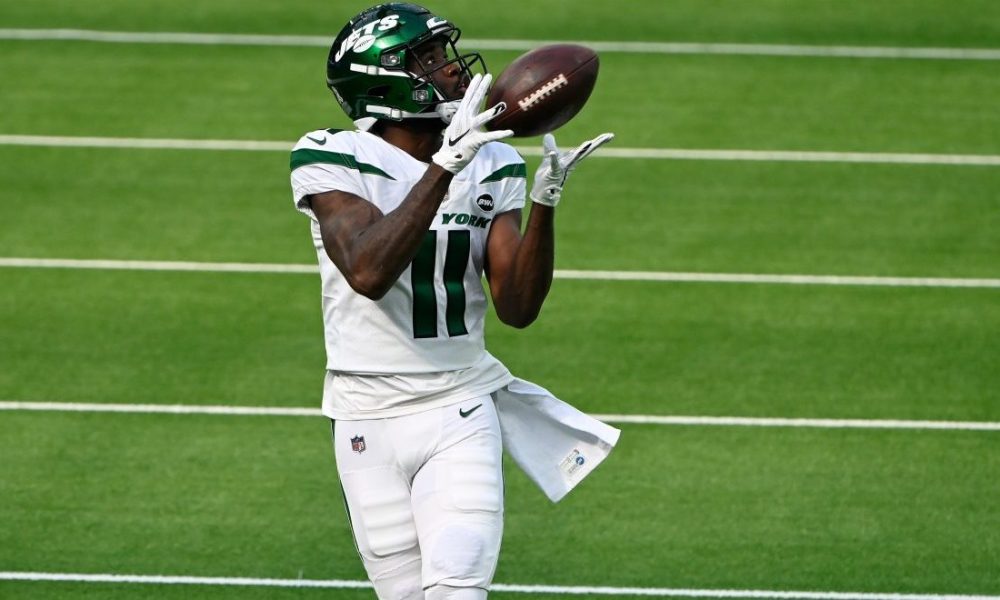 -Poor coaching and QB play held him back. On the year, the Jets ranked dead last in total yards and points.

-If the Shanahan principles remain, look for pre-snap motion and play-action passing to help open windows in the passing game.

-Mims will have to battle for targets on an offense that includes Corey Davis, Jamison Crowder, rookie Elijah Moore and Chris Herndon. There’s at least a chance New York saves money and gets out of Crowder’s bloated contract.

-Mims, however, is playing behind Keelan Cole in June OTAs. There's certainly time for Mims to leapfrog the veteran, though.

-Rookie QB Zach Wilson projects as an instant upgrade on Sam Darnold, but we fully expect growing pains in year 1. His college tape at least showed a willingness to take shots downfield on 50/50 balls. Good news for Mims.

If you’re drafting Mims, you’re hoping for his raw ability to shine. The guy looks like a WR1 from a size and athleticism perspective. Only 23, it’s quite possible we see a year 2 jump.

But what about opportunity? This new coaching staff has made it a priority to add pass catching talent, and a trio of Corey Davis, Elijah Moore and Jamison Crowder will be tough to crack. A Crowder departure would be huge for Mims, but he'll still need to overtake Keelan Cole.

If nothing else, the Baylor product is an enticing stash who’s available late in drafts.

Mims back with team

Jets WR Denzel Mims returned to the team after leaving last week to deal with a family matter, insider Ralph Vacchiano reports. As long as Mims doesn't test positive for COVID, he'll play Week 15. Unfortunately, a matchup with the Rams will leave him outside fantasy-starter territory.

Mims out for Week 14

Jets WR Denzel Mims won't play against the Seahawks on Sunday after traveling home to Texas to attend to a family emergency, HC Adam Gase said. Mims has averaged 6 targets over the past 6 weeks, so it's a notable loss. WR Jeff Smith figures to replace Mims in the starting lineup but would be a desperation fantasy play. WRs Jamison Crowder and Breshad Perriman gets boosts with Mims out.

Jets WR Denzel Mims has left the team to attend to a family emergency in Texans, according to NFL Network's Ian Rapoport. The question now becomes whether Mims returns in time and clears COVID protocols to play against the Seahawks on Sunday. We'll keep an eye on the situation, but fantasy owners who were hoping to use Mims this week should have a backup plan.

Mims out, Perriman will play Week 1

Jets WR Denzel Mims is out for Sunday’s opener against the Bills. The rookie is reportedly dealing with injuries to both hamstrings and can be dropped from redraft rosters. WR Breshad Perriman (knee) isn’t listed on the final Week 1 injury report but isn’t a fantasy option in a matchup vs. CB Tre’Davious White. WR Jamison Crowder and TE Chris Herndon are the Jets’ top target bets.

Jets rookie WR Denzel Mims returned to practice Wednesday for the 1st time since sustaining a hamstring injury more than 2 weeks ago. It marked the 1st padded practice for Mims since joining the Jets and the "first time I've seen him run routes live," HC Adam Gase said, per ESPN's Rich Cimini. We'll see what kind of role Mims can carve out with about a week and a half before the opener. Breshad Perriman's continued absence for a knee injury provides opportunity.