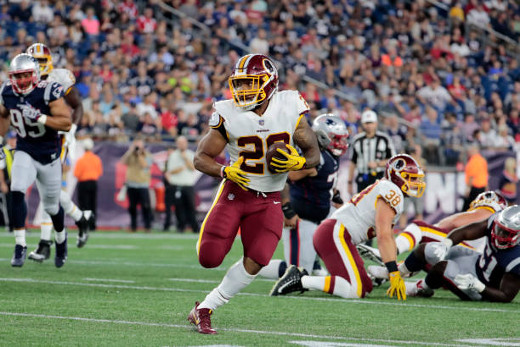 Police arrested RB Derrius Guice on Friday afternoon on domestic violence-related charges. According to The Washington Post, Guice faces 1 count of strangulation (a felony), 3 counts of assault and battery and 1 count of destruction of property. Washington swiftly announced that it had released Guice. Unless these charges somehow prove to be baseless, don't expect Guice to be on a roster for the coming NFL season. Adrian Peterson now looks like the lead ball-carrier for Washington, with Antonio Gibson, Bryce Love, Peyton Barber as his current competition. We'll see if the team adds a free agent (*cough* Devonta Freeman *cough*).

The Redskins added RB Antonio Gibson in the 3rd round of the 2020 NFL Draft. Here’s 1 of the biggest wild cards in this year’s draft. Gibson spent his first 2 college seasons at East Central Community College before transferring to Memphis. He tallied just 6 touches in his first year with the Tigers before breaking out as an offensive weapon this past season. Gibson caught 38 balls for 735 yards (19.3 YPC) and 8 TDs, while adding 369 yards and 2 scores on 33 carries (11.2 YPC). He also averaged a big 28.0 yards with 1 TD on 23 kick returns, earning Conference USA Co-Special Teams Player of the Year honors. Per Pro Football Focus, Gibson broke a ridiculous 33 tackles on his 71 offensive touches this past season. Then he went to the Combine and blazed a 4.39-second 40 time at 6’0 and 228 pounds and earned an 83rd percentile SPARQ score. We think Gibson would work best at RB — and that’s where he was announced when Washington picked him. Of course, this is a crowded backfield with Derrius Guice and Adrian Peterson.

Derrius Guice, RB UNS There is no dynasty data for this player.