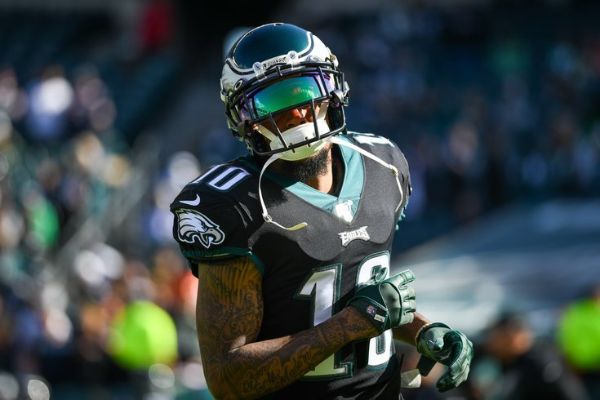 Weekly numbers will be released Tuesday at 12pm

Week 5
The gap between DeSean Jackson and Van Jefferson shrank in Week 5 as Jefferson only ran 8 more routes than Jackson. Prior to Week 5 Jefferson had run 80 more routes than Jackson on the season. This will be a situation to monitor as Jackson currently leads the NFL in yards per route run at 4.22 (min 10 targets). If Jackson begins to carve out a bigger usage role in this offense, he could begin to see WR3 value as he operates as the clear deep threat for Matthew Stafford this season.
Heading into Week 6 neither player should be trusted in your lineups with Robert Wood reclaiming his role as the clear 1-2 punch with Cooper Kupp. However, it wouldn’t be a bad idea to stash Jackson on your bench to see if the trend continues as he could be an asset later in 2021.

Jackson has managed to play in just 8 games over the past 2 seasons and will turn 35 later this year. We obviously can’t count on him for the entire 2021 campaign.

But Jackson has remained effective when on the field and has a chance to win the #3 WR job in what should be a strong Rams passing game under HC Sean McVay and QB Matt Stafford.

Jackson is a nice late-round target in best-ball drafts and could be a spot-start option in lineup-setting leagues.

Rams WR DeSean Jackson has had a "fantastic" camp, insider Cameron DaSilva writes. "Seemingly every day he’s making catches deep down the field for touchdowns, proving he still has that top-end speed and can threaten defenses," DaSilva adds. "Expect him to play a big role on offense this season, assuming he’s able to stay healthy." That last part is key. Jackson has enjoyed a healthy offseason so far. As long as that continues, he could be a sneaky fantasy option in what should be a strong Rams passing attack.

NFL Network's Mike Garafolo reports that WR DeSean Jackson is joining the Rams. The 35-year-old wideout appeared in just 8 games over 2 seasons back with the Eagles -- and missed 4 games in his final Tampa season the year before. When on the field, though, Jackson has remained a speedy deep threat. His arrival would hurt Van Jefferson's chances of claiming a top-3 spot on the Rams' WR depth chart. It would add upside to QB Matthew Stafford's fantasy profile, though.

WR DeSean Jackson has been released by the Eagles, according to DeSean Jackson on Instagram. The move saves Philly almost $5 million against the cap and was a no-brainer move for a team in rebuilding mode. Jackson is 34 and managed to hit the field for just 8 games over the past 2 seasons. He's proven to still have gas in the tank when he has been healthy, averaging 17.2 yards per catch in those 8 games. We'll see how much interest he garners on the open market and where he eventually lands.

Jackson out for Week 17

Eagles WR DeSean Jackson (ankle) is out for Sunday night’s game vs. Washington. He popped for a long TD in last week’s win over the Cowboys but is hurt again. Jalen Reagor, Greg Ward, Alshon Jeffery and Travis Fulgham will be Philly’s top 4 WRs in the finale.

Eagles WR DeSean Jackson (ankle) has been activated from IR, putting him on track to return for Sunday's game against the Cowboys. He couldn't be trusted in fantasy lineups in his 1st action since Week 7, but Jackson's presence can't hurt QB Jalen Hurts' outlook.