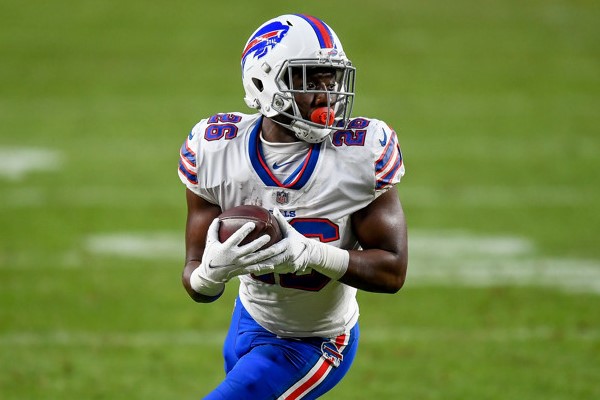 Singletary ran a route on a strong 79% of Josh Allen’s drop-backs last week at Baltimore. Now facing a banged up Pittsburgh D, the scoring matchup lines up well for Buffalo.

Credit Singletary for a breakout 2021. The 203-pounder finished as the PPR RB19 on the strength of 8 total scores. He appeared in all 17 games.

While he’ll be propped up by another excellent Buffalo offense, 2022 turns up his stiffest backfield competition yet. Round 2 pick James Cook arrives as a pro-ready receiving/change-of-pace back with explosive ability. He all but assures that Singletary doesn’t see another 50 targets.

Entering a contract season, the 25-year-old (in September) is best treated as an RB3/FLEX.

Bills beat writer Joe Buscaglia writes that the Bills don’t trust RB James Cook, and a game-day deactivation might be upcoming. Devin Singletary played a whopping 88% of the snaps in Week 4 at Baltimore. Cook fumbled in the opener and dropped a pass against the Ravens, so the trust issues make sense. Buscaglia also points out that the Bills’ blocking style doesn’t mesh with Cook’s strengths. For now, it’ll take a Singletary injury for Cook to enter the fantasy radar.

Singletary sets another high in yardage

Bills RB Devin Singletary set a season high in total yards for the 2nd straight game in Sunday's win over the Ravens. Singletary gained 49 yards on 11 carries and caught 4 of 5 targets for 47 yards. Those 96 total yards edged his 91 total yards from the Week 3 loss at Miami. Neither amounted to a big fantasy day (though he added a TD against the Dolphins), but the strong yardage signals what's available to him as Buffalo's clear lead back. Singletary figures to reside in RB3 territory of our rankings most weeks, but he'll be a solid option in that range with clear upside when he gets some TD luck. Zack Moss handled the other 3 RB rushes for the Bills at Baltimore, with James Cook drawing the group's only other target.

Bills RB Devin Singletary set a career-high with 9 catches in Week 3 vs. Miami. He scored early in the game on a 4th-down pass where the Dolphins defense left him completely unmarked. Those contributions were key for fantasy, as the contract-year rusher added only 13 yards on 9 carries. Sunday’s game was played in extreme heat, so it’s quite impressive that Singletary handled 67 snaps (73%). Zack Moss, meanwhile, played only 16 snaps (5 touches). Singletary should remain a viable FLEX for the road ahead.

Cook loads up on late carries vs. Titans

Bills rookie RB James Cook led the team in rushing attempts in Monday night's lopsided win over the Titans, but nearly all of that came after starters had left the game. Cook handled Buffalo's final 9 carries, with Case Keenum at QB, finishing with 11 rushes for 53 yards. Devin Singletary carried 6 times for 19 yards and led the backfield in targets (4). He caught 2 passes for just 2 yards. Zack Moss added 17 yards on 3 carries. He and James Cook each saw 1 catchless target.

The Bills tried to sign J.D. McKissic and then drafted James Cook in Round 2. That seems to signal they'd prefer to throw Singletary the ball less often. He's set to hit free agency next offseason.